The Lorenzen Family Collection: How We Cook in El Paso 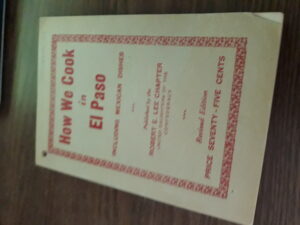 This copy of the 1926  cookbook “How We Cook in El Paso”  is part of the  Lorenzen Family Collection. It belonged to Ada Lane Lorenzen, who was an active civic leader and served as president of the El Paso Woman’s Club. She was also a charter member of the El Paso County Historical Society.

“How We Cook in El Paso” was compiled by El Paso’s Robert E. Lee Chapter of the United Daughters of the Confederacy. This cookbook was first published in 1909  and published in 1926 by the Mcmarth Publishing. The book was sold for 75 cents at the El Paso Book Company, which was located at the time in the Mills Building. It was billed “as a collection of tested recipes by El Paso housewives including collections of Mexican dishes”. El Paso Herald Reporter, Bessie Simpson wrote about the book in 1965. “ This interesting cookbook includes treasured recipes submitted by the good ladies of El Paso soon after the turn of the century at a time when automatic ovens and timing devices were yet unknown. When “store brought” bread and instant mixes were unheard of. When cooking was a true art governed only by the homemaker’s skill and experience.”[1]

The cookbook is filled with recipes contributed by women who were prominent in the community and came from the leading families of El Paso at the time like the  Newmans, Tooley, Fewels, Kellys, Burges, Sweeney, and Broaddus. Contributors included Elizabeth Kelly served as El Paso Children’s Librarian and director of the El Paso Public Library. She was the daughter of El Paso Mayor Charles Kelly. Elizabeth’s mother, Willie Word Kelly was also a contributor. She was a teacher at El Paso High School in the 1890s before her marriage.  Her sisters, Anne Quinn, and Charlee Kelly also contributed to the project. Anne was also a teacher in El Paso public schools and Charlee was one of the first El Paso members of the Women’s auxiliary Corp during World War II. There is also, County School Superintendent Myra Carroll  Winkler, who was the first woman to hold elected office in El Paso who contributed recipes along with her mother, Angelina, who founded the first literacy magazine in Texas. Other contributors included Kate Farnham, a pioneer policeman; Ruth Munro Augur, who was a well-known artist and organized the first suffrage league in El Paso; another well-known artist, Mattie Graves; Myra Prater Clark,  a well-known El Paso school principal, and owner of the Motor Inn hotel in San Elizario also known as Casa Roquillo a historical landmark; Emma Campbell, founder of the El Paso Child Christ Society; Mattie Graves an artist, and Edna White Bull, who owned Evergreen Cemetery. Another contributor was Calla Eylar, who went on to serve in the New Mexico State Legislature. Another notable contribution was “McGinty Brunswick Strew” by Catherine Shoupe Watts, which was often served at the picnic held by an early El Paso social group, the McGinty club.

The photo above is of Ada Lane Lorenzen.

“One-half pound of American cheese(about 1 and ½ cup grated cheese ) 1 tablespoon of melted butter, ½ teaspoon of mustard, paprika, salt, 1 egg. Mix all together in smooth paste spread between slices of whole wheat bread. Fry the sandwiches in butter in the frying pan, until brown on both sides.”

“One and one-half cups, grated cheese, 2 egg white beaten stiff, ¼ teaspoon salt, a dash of paprika. Mix all together and form into balls the size of a marble. Place on ice for two hours or more this is imperative fry in deep fat until a nice brown. Serve hot with crackers.”

“Dissolve a cake of compressed yeast in a pint of lukewarm milk. Sift 2 quarts of flour in a mixing bowl. Pour the milk into the center of the flour and stir lightly with a silver fork to form a soft batter. This takes only a very small part of the flour; the soft batter is in the midst of the bowl of four. Let it stand until the batter rises, then add 1 tablespoon of lard, 1 tablespoon of sugar, a little salt, and milk, necessary to work to a smooth dough. Let rise, knead again, mold, and let rise in pans. Bake in a moderate oven.”

“One can grated Pineapple, 4 large oranges cut up fine, package coconut. Place alternate layers of pineapple, and coconut in a large glass dish, with pulverized sugar sprinkled between,  then finish at the top with coconut. Pour over the whole juice of oranges and pineapple. Delicious, and an old recipe.”

One can of sliced pineapple, 3 medium-sized oranges, 1 can of white cherries; cut pineapple and oranges and seed the cherries; put sugar over fruit and let stand.; drain off the juice before adding salad dressing; add 1 cup pecans. Dressing; two eggs beat well with Dover beater, a little salt, a little mustard, or 5  tablespoons of sugar or more if desired, 1/2 cup of vinegar add slowly while beating; cook slowly and stir while cooking when cool add 1 pint whipped cream; mix with fruit just before serving”.

One cup of olives, cut in small pieces; 1 cup of pickles, cut up; 1 cup of stale bread, cut in small cubes; 1/2 can of Spanish pepper (pimentos), cut small;  well together and pour over mayonnaise dressing. Served at the to members of the Elks Club by Mary Hammett, wife of El Paso Mayor, Ben Hammett at the opening of their new home in 1906.

‘Three pounds of tender squash, 1 pound of ripe tomatoes, 3 medium-sized onion,3 medium-sized green chile. Wash, peel and slice squash, put in a saucepan with a small amount of water, cook until tender. Cut onions in small pieces, and fry in hot drippings until it begins to brown, turn the squash and fry for a few minutes. Have the tomatoes and Chile cut in small pieces and add to squash, season well with salt and pepper.  Let cook until a light brown.”

“Break one box of spaghetti into medium-length pieces drop into boiling salt water, let boil exactly for  20 minutes, pour into a colander and drain. Cut 2 medium size onion fine, broil in olive oil, until done, add 1 can tomatoes, 1 can green chill, chopped fine, on the fourth pound, Italian stuffed sausage chopped fine. Cool all together for a few minutes. Pour over the spaghetti, mix well, then put on a large platter, sprinkle well with grated cheese, break three uncooked eggs over them, sprinkle one can of mushrooms. Set platter in a hot oven for twenty minutes, serve hot.”

Whip 1 pint cream very stiff, add  1 pound macaroons (after having powdered them). Put them in molds in one layer of this mixture and one of the cherries.

“Bake a crust on the outside of a pie pan and chill thoroughly when ready to serve, fill with any desired ice cream, cover with beaten whites of two eggs, brown quickly to a hot oven and serve at once.”

Two cups flour, ½ teaspoon salt, ½ cup Crisco or two-thirds cup lard, ice water. Mix and sift the dry ingredients, cut in the cold shortening with two knives, using as scissors, one held in each hand. Add enough ice water to make stiff dough toss slightly floured board, roll thin, leftover the rolling pin to the pie pan. Be sure there no air bubbles under the dough. Never oil or four a pie pan, a god crust greases its own pan. Bake in a hot oven 15 or 20 minutes,  if it is to be used for one-crust pie.

“Put one pound of marshmallows in a saucepan, add two cups of sweet milk. Cook until marshmallows are melted. Place two ladyfingers, softened in milk, in the bottom of each sherbet glass, and pour over them in the marshmallow mixture, allow to cool, sprinkle with pecans and serve with whipped cream.”

“Six eggs, ¾ of a pound of sugar, one-fourth of a pound of butter and two lemons. Grate the peel of lemons and mix with sugar, squeeze and strain the juice, melt the butter. Beat eggs very light, without separating, add sugar, then melted butter, and last the lemon juice, beat them thoroughly. Line patty pans ( or individual pie plates) with good pastry. Fill with the mixture( no top crust) and bake in a moderate oven.”

“One pound flour, 1/2 pound butter, 1/4 pound sugar. Mash together thoroughly kneading until the mixture adheres. Make into a round cake about three-quarters of an inch thick and bake in the oven.”

“Put cranberries through food chopper, cook with half as much water, let boil 10 minutes. Take equal quantities of cranberries and sugar, boil for 5 minutes, mold at once.”

“Into a quart of well-whipped cream stir ½ pound each of balanced almonds and crystallized cherries chopped fine. Freeze” 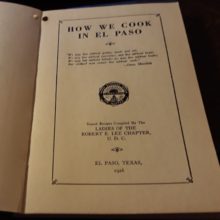 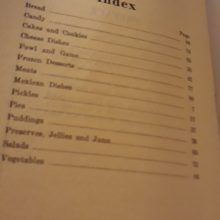 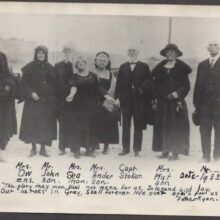 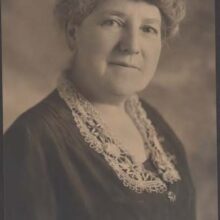 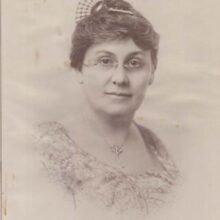 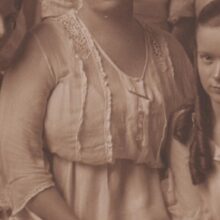 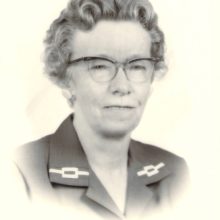 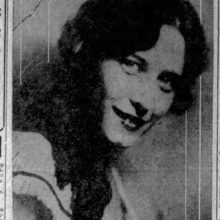 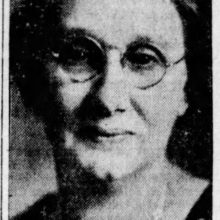 Rosie Lee Bolton Served as President of the Lower Valley Woman’s Club and the Pioneer’s Women’s Association. She was the wife of J.W. Bolton who ran Bolton’s Cafe in downtown El Paso. Courtesy of the El Paso Times 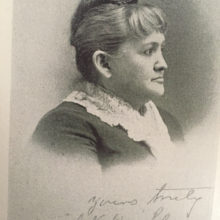 Angelina Winkler published the first literacy magazine in the Texas. 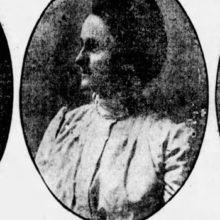 Myra Winkler who was the first woman to hold elected office in El Paso. 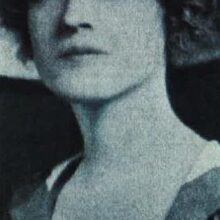 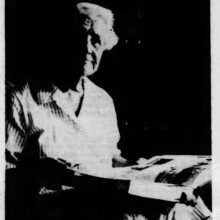 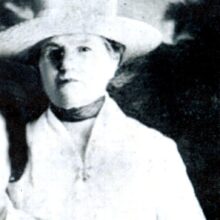 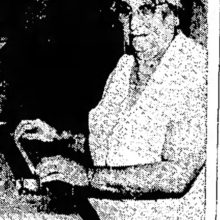 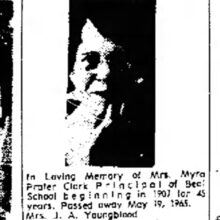