The Burges House in the Sunset Heights Historic District was built for Richard Fenner Burges by contractor J. E. Morgan. Alterations and additions were made in 1927 under the direction of architect Otto H. Thorman. Facing west, the two-story house carries the Adams Architectural style from the Georgian Revival manner popular in El Paso from 188 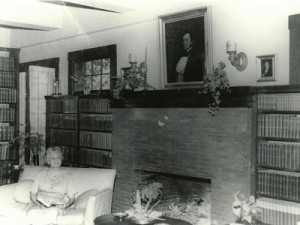 A six-foot grey Franklin stone retaining wall and an additional six feet of sloping yard support the house with classical Revival characteristics. Concrete steps, flanked by retaining walls, lead the entry under a four column, two-story portico. The four round columns are fluted with simple capitals and base resting on square plinths. The main entrance consists of two French doors with an arched fanlight above, and strongly rusticated wall treatment. The building is brick, finished in rough almond-colored stucco and a shallow pitched red composition roof and wide overhangs.

Alterations and additions by Thorman in 1927 included the removal of dormers from the roof, an added portico with fluted columns of the Doric order and upstairs sleeping porch with entrance vestibule below, and a new screened porch on back. Plans were drawn at this time for a 26” x 21” library room which was added on the back of the house and an open porch on the south side of the house.

Jane Burges Perrenot, in the living room of Burges circa 1954Mrs. Burges (Ethel Petrie Shelton) died while the house was under construction. When Ethel Burges died, the Burges’ only child, Jane Rust, was twelve years old. When the family moved into the home, Mrs. Burges’ sister, Marie Shelton Howe, and her husband and children lived with them. In 1923 Jane married Preston Rose Perrenot. The wedding and reception were at the house beginning a tradition that saw about twenty-five weddings or receptions through the years. The Perrenots moved into the house about four years after their wedding. The couple had three children, Richard Burges, Mary Austin and Anne. The home stayed in the Burges family until Jane Perrenot’s death in 1986 when she willed the property to the EPCHS.

The Burges house is available for small group (less than 25) meetings. Call 533-3603 or e-mail: info@elpasohistory.com for more information. 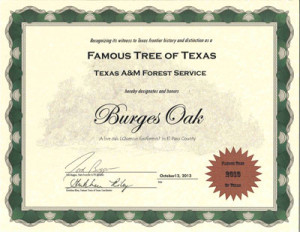 This Live Oak tree was planted by Richard Burges in 1914 and is most probably the first (and oldest) Live Oak in El Paso. Thanks to Bernie Sargent for this information from a Feb. 18, 1947 El Paso Times article.

“When I am forever from this life
Erect no marble shaft for me
But plant, somewhere upon a dusty road
An acorn in my memory.
And plant it deeply that the seed may spring 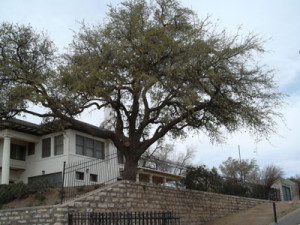 Into an oak some distant day
A tall and stately tree to spread kind shade
For travelers that come that way
And hold its boughswide-spread
To welcome there small feathered creatures
On the wing
That they may find sanctuary and the world
May share the loveliness they sing.
Then I shall rest in peace, content to know
I have a monument where oak trees grow”.

Richard F. Burges was born at Seguin, Texas to Bettie (Rust) and William H. Burges,Sr After his education in the public schools, Richard attended Texas A&M for one year. In 1892 he followed his older brother William, and his uncle, Dr.W.M. Yandell to El Paso where he studied law in Williams’ office, then
was admitted to the bar in 1894.

From the time he came to El Paso, Burges played a prominent part in the development of El Paso and the Southwest. As city attorney from 1905 to 1907 he led the fight against organized gambling and wrote the city charter that was still in effect at the time of his death. 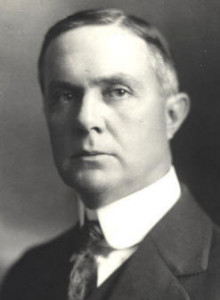 An able attorney in many areas, his special field was irrigation law. He played a prominent role in the initiation and development of the Elephant Butte Dam project and was elected president of the National Irrigation Congress in 1915.

He served as Assistant Counsel for the United States in 1911 regarding the Chamizal controversy; counsel for Texas in negotiations with New Mexico over diversion of waters of the Pecos River; special counsel and later member for Texas of the Rio Grande Compact Commission; authored the Texas Irrigation Code, the Texas Forestry Act and (1923) was President of the Texas Forestry Association. He was also appointed by the Supreme Court of Texas to serve on an advisory committee for reformation of the State Rules of the Practice of Civil Procedures. Burges also served two terms as State Representative, 1913 (thirty-third legislature), and 1915 (thirty-fourth legislature).

In June 1917 Burges organized Company B, Texas National Guard which was incorporated into the Thirty-sixth Infantry Division as Company A, 141st Infantry. He commanded his battalion in the battle of the Argonne and was awarded the Croix de Guerre for distinguished service. Serving under Burges was Sam Dreben, the “Fighting Jew”, called by Gen. Pershing the ‘bravest man in the AEF”. Burges was promoted to Major just before returning home at the end of the war. In 1898, Richard F. Burges married Ethel Petrie Shelton, an estimable young lady of a prominent family.

Ethel died in April, 1912 when the Burges house was in its’ early stages of construction. To Richard and Ethel Burges was born a daughter, Jane. Upon Richards’ death in 1945, Jane inherited the estate, and, on Janes’ death in 1986, she bequeathed the Burges home to The El Paso County Historical Society.