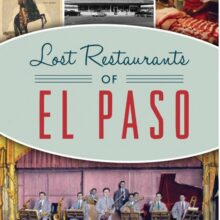 From El Paso’s earliest days, the mix of travelers who have moved through the Pass City have left their mark on the meals that grace our tables as well as the tables of our lost restaurants, including the Hacienda Café and Café Central.

Pancho Villa could often be found enjoying ice cream baseballs at the Elite Confectionary, a restaurant also featured in the book.

Readers will recognize many of the restaurants and proprietors in the book and will be introduced to others they may not have known.

In the diary, written during his late teens and early twenties, Burges recounts his life in the far west Texas town of El Paso shortly after his arrival from Seguin. As El Paso enters its formative years, Burges does too, and he views the rapid development of the city with insight and wit befitting a man of such wisdom.

This book is available for $15.00 plus Texas State Sales Tax if you pick it up at the Burges House, 603 W. Yandell. There is a fee of $5 for shipping. Buy yours today. Supplies are limited!