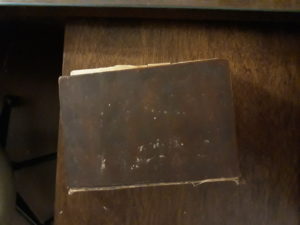 One of the early recipe books that the El Paso County Historical Society has in its archive is the Century Cookbook by Mary Ronald. It was first published in 1895 in England. This book is considered by scholars to be culturally significant to American Culinary history. The cookbook was republished in 2016. The book in our archives belonged to  Flora Hague (1852-1908). Hague was the wife of El Paso politician and attorney, James Hague. This book is part of the Hague Collection.

Tucked in the book is a recipe for Apple Sauce Cake probably cut from some magazine. The cookbook is worn. The evidence of the constant use of the book is illustrated by the fact that the cover of the book is missing and the binding is loose.

There also appears what could be food stains on some of the pages. These pages include recipes for Moises Wafers, White Cake, 1-2-3 Cake, Pound-Cake, Gold and Silver Cake, and Royal icing, perhaps indicating these recipes were actually used by Hague.

Take look at The Century Cookbook  at