One of the items accessioned into the archival collections last month was this special El Paso Times newspaper supplement from February 1968 celebrating the International Rodeo & Southwestern Livestock Show. 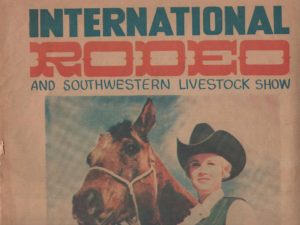 Its pages are chock-full of articles & advertisements pertaining to the rodeo & all of its accompanying events.

One of the main attractions was the personal appearance of Bill Engesser (aka, “Big Frank” Engesser), a 7’3” 330 lb. giant from California who worked for the public relations department of the Morell Meat Packing Company. A natural-born athlete, “Big Frank” was the star of his El Monte High School basketball team & went on to play college ball for USC. Although he was offered contracts by both NBA & NFL teams after college, “Big Frank” rejected a career in professional sports; instead, he opted to earn his living in advertising & public relations. He also made an occasional appearance in films & television. With an innate gift for promotion, his colossal size automatically drew a tremendous amount of attention; he was often sent to rodeos & livestock shows to represent the interests of his firm & to bid for livestock at auctions. Local meat packing firm, Peyton Packing, sponsored his appearance at the 1968 International Rodeo & Livestock Show in El Paso, & “Big Frank” was present every day of the festivities. 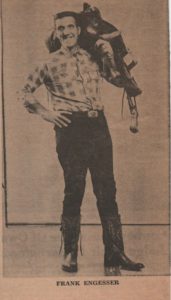 Another slightly unusual feature of the 1968 Rodeo was the presence of Edie Hefley, a student from California and her date—Canadian pop singer, Terry Black. Contestants on the popular TV show “The Dating Game,” bachelorette Edie & her lucky bachelor Terry won a trip to the International Rodeo in El Paso for their exotic fantasy date. After being met by a slew of local dignitaries at the airport, the young couple was carted off to Tony Lama Boots & Ruddock’s Flying R Ranchwear to be decked out in authentic Western clothing. Properly attired, the newly-minted cowpokes were consumed by “a swirl of Western activities” (excluding horseback riding, which was strictly prohibited by the television network). Riding in a traditional stagecoach in the big parade & serving as guests of honor at the rodeo’s opening ceremonies concluded their flurry of activity.  Sadly, their dream date to El Paso was a romantic flop; Terry went on to marry someone else (a fellow entertainer) just a couple of years later. But, it’s unlikely either one of them ever forgot their whirlwind trip to the Wild West…Mwah!

Since 1954 the El Paso County Historical Society has been a driving force in the historic scene of El Paso. EPCHS strives to foster research into the history of the El Paso area; acquire and make available to the public historic materials; publish and encourage historical writing pertaining to the area; and to develop public consciousness of our rich heritage.
Previous Photos: El Paso Aviation Next Event-Anita Blair: El Paso Legend, May 21