Event June 18, 2016: Death on the Calle del Diablo–The killing of “El Pablote” and the Birth of the Narcocorrido

Join us this Saturday, June 18, 2016, at 10AM for Bob Chessey’s presentation on Juarez drug kingpin Pablo Gonzalez.

Pablo “El Pablote” Gonzalez was one of the first “drug lords” of Juarez, Chihuahua Mexico. “El Pablote” practiced his craft from 1924-1930. In 1930 he was killed in a gunfight inside the red light district of Juarez. Within a year of his killing, a corrido describing his reputation, the gunfight, and funeral was released. Research shows that this is the first documented “narcocorrido.” El Pablote’s reputation became inflated after his death into that of a legendary gunman. Come hear about his epic story, one that not only captures the essence of the man, but that of a culture still imbedded in this area. 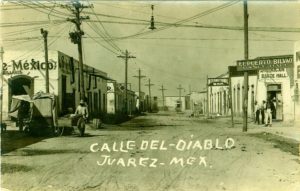 Since 1954 the El Paso County Historical Society has been a driving force in the historic scene of El Paso. EPCHS strives to foster research into the history of the El Paso area; acquire and make available to the public historic materials; publish and encourage historical writing pertaining to the area; and to develop public consciousness of our rich heritage.
Previous El Conquistador Spring 2016 Next Event June, 25: Find Your Legacy: Genealogy Workshop