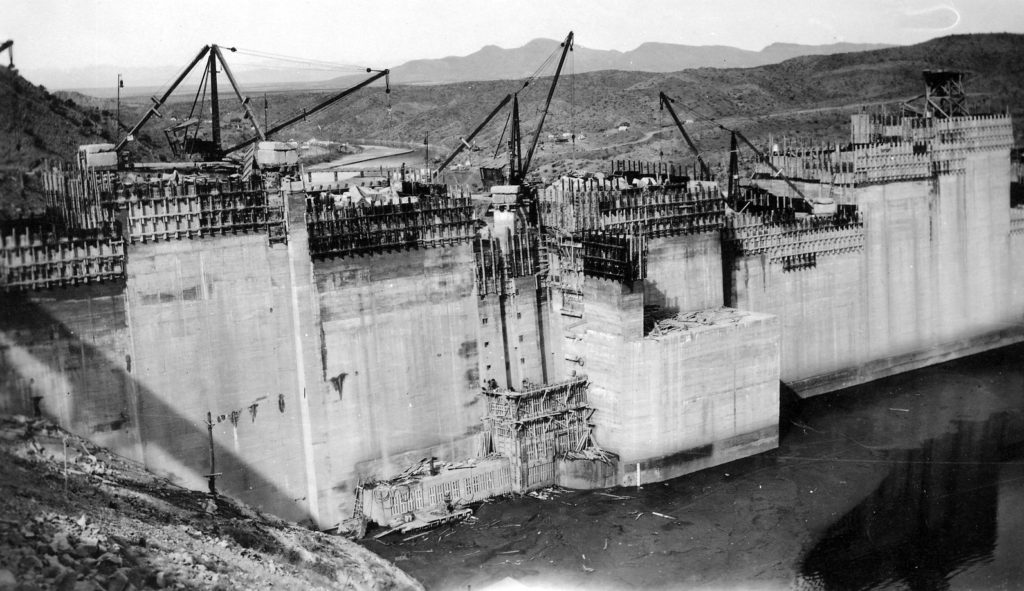 Construction of Elephant Butte Dam was authorized by the United States Congress on February 25, 1905 and started in 1911. The 100-year-old dam is 301 feet high, 1674 feet long and used 618,785 cubic yards of concrete. Dedication ceremonies were scheduled for Oct. 14, 1916 but were postponed, “owing to the excessive rains in the last few days making it impossible to run trains or automobiles to the dam until the country dries off.” The dedication of the damn happened on Oct. 19, 191

“By reason of the completion of the dam agricultural industry both north and south of El Paso, in the southern part of New Mexico, in Texas and in northern Chihuahua is stabilized. Over 200,000 acres of extra-ordinarily fertile land will now be intensively cultivated instead of the approximately 60,000 acres, which heretofore have been cultivated. All of this section of the southwest will profit because of the countless acres which have been redeemed by the capture and taming of a heretofore capricious and somewhat worthless river.”

Since 1954 the El Paso County Historical Society has been a driving force in the historic scene of El Paso. EPCHS strives to foster research into the history of the El Paso area; acquire and make available to the public historic materials; publish and encourage historical writing pertaining to the area; and to develop public consciousness of our rich heritage.
Previous 1998 Union Plaza Development Report Next San Elizario’s 20th Annual Veterans Day Parade Nov. 5, 2016