In 1921, the El Paso Tennis and Swimming Club was founded. The organization only allowed men at first, but in 1923 women were allowed to join. Some of the early women members included Mary and Virginia Seamon, Norma Heffler, Dorothy Crawford, Elise Strickland, Bena Perez, Elizabeth Coldwell, Mrs. C.A. Mitchell, Ruth Mott Rawling, Margie McBloom, and Chella Phillips. Phillips was manager, trainer and player at the El Paso Tennis Club for over thirty years. Phillips oversaw the installation of a new drainage system to drain water off the courts. Phillips also would allow women players to go to her home to change because there were no locker rooms for women at the tennis club. 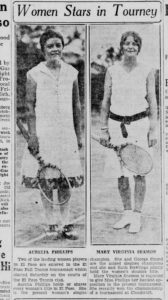 nd with George Cound and Russell Ball, she won mixed doubles twice.  She also competed in the Southwestern and New Mexico State event and earned over 50 titles in nineteen years. Phillips retired from tennis after a knee injury in 1947. In 1955, she was appointed manager at the El Paso Tennis Club, serving until her retirement in 1966.

Maybelle Long was another city tennis champion and was often doubles partner to Phillips. Long were a teacher and coach at El Paso High School, from which she graduated in 1919, and was chosen one of the best coaches and referee by U.S. Coaches and Referee. Long headed the girl’s physical education department at El Paso High School where she developed athletic programs for girls and promoted the importance of girls’ participation in sports. In 1929, long earned her certification from the National Basketball Referees Association, taking the courses required at Wesley College. That same year, Long attended the Northwest Hockey Camp in Illinois. Phillips also helped developed and promote hockey in El Paso. Long founded the Girl’s Hockey team at El Paso High School. She was also the sponsor of the Girls Tumbler’s Club at the school.  Long went on to graduate from Berkeley University and later earned her Masters in Physical Education from Columbia University. She also taught dance, acrobatics, and tennis. With her leadership, her players won eight State Championships. Long also coached the boy’s tennis club during WWII, taking them to the state Championships. Long won three city women tennis titles in the 1930s and 1940s. Long with Phillips won every women doubles title in the city from 1930-1941. Philips and Long won three New Mexico State Tennis Doubles Championships in the 1930s. She was also a Bridge champion and played basketball. Long also co-authored  a book, “Fundamentals of Physical Education.” 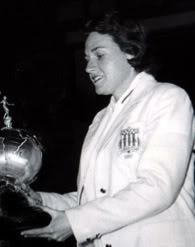 In 1945, Bloss won her first Tennis Singles crown and was named to the Junior Wightman Cup Singles and then held the title again in 1947 and 1951. In 1954, Bloss was ranked third in the Women’s Doubles National Championships and was ranked 15th in the International Women Tennis Singles. Bloss won ten national titles in total in her career.

In 1950 Bloss graduated from Texas Women’s University and taught at Holyoke Community College in Massachusetts. In 1958 she won the Texas State Tennis Doubles Championship with Lucille Scoggins, daughter of actress Tracy Scoggins. Bloss played in Wimbledon from 1955 to 1962. In 1955, Bloss was National Badminton Championship and won the world title twice in England at Wembley. Bloss was the national squash champion four times in the 1960s before retiring. Bloss came back to El Paso, and along with another tennis champion, Margaret DuPont, started a horse breeding business in the upper valley. 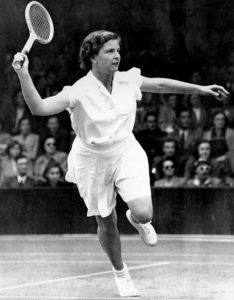 Margaret  Osborne DuPont was born in Joseph, Oregon and grew up on a ranch. Margaret and her family moved to Spokane, Washington, at the age of nine she started playing tennis. Her father became sick and was unable to farm, two years later they moved to San Francisco and her father worked as a car mechanic. At 11 years old, DuPont started playing at the Golden Gates Public Tennis Courts and competed in Tennis Competitions. DuPont also wrote articles for the American Lawn Tennis Magazine. She graduated from Commerce High School in San Francisco and decided to play tennis as a career. At the age of 18 she took a train to Philadelphia and won the Junior National Single and Doubles Tennis Titles. DuPont trained with a renowned coach named Tom Snow. She started writing and working for the Northern California Tennis Association and worked for marine shipbuilder during WWII. DuPont dreams of becoming a tennis champion came true, she became one of the leading tennis players in the U.S. She won the United States National Open Tennis championships at Forrest Hills, Queens, New York in 1948, 1949, and 1950. She won the French Open Singles in 1946, 1947, and 1948. DuPont won 13 National Titles, 9 mixed doubles titles, and 25 U.S. Nationals, an all-time record. Her last tennis match was at Wimbledon. DuPont was a good friend of Margaret Varner Bloss. DuPont died in 2012. 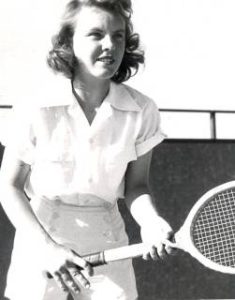 Mary Cunningham Hoover was a native of El Paso and cousin to Bloss. Her mother was credited with getting Bloss interested in tennis. Hoover started playing golf, with a 19 handicap. She held a course record at the golf course at the Coronado County Club. Hoover won 39 non-handicapped golf tournaments in Texas, New Mexico and Arizona. In 1941 she started playing tennis and won a national doubles championship in 1946.

Peggy Robertson Birkhead  Played in Tennis Competition starting in 1946. She was ranked the first 45th in singles for the Southwest. Birkhead won various titles in Texas, New Mexico, Arizona, and Mexico and was included in Who’s Who. She was inducted into the El Paso Athletic Hall of Fame and was the first woman to serve as president of that organization. Birkhead was a graduate of  El Paso High School.

Since 1954 the El Paso County Historical Society has been a driving force in the historic scene of El Paso. EPCHS strives to foster research into the history of the El Paso area; acquire and make available to the public historic materials; publish and encourage historical writing pertaining to the area; and to develop public consciousness of our rich heritage.
Previous Animals at Washington Park Zoo. Next The Pershing Theater: 2905 Pershing Drive