The El Paso County Historical Society is pleased to announce its selections for the 57th Hall of Honor. This year’s honorees are: Alex and Patti Apostolides, Former Mayor Don Henderson, James Peak, and Former Mayor Bert Williams. The event will be held Sunday, November 5, 2017, at the El Paso Country Club, 5000 Country Club Pl, El Paso, TX 79922. Short biographies of the recipients are located below: 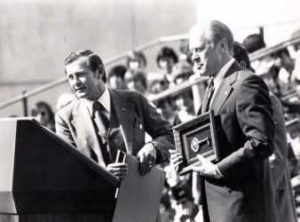 Mayor Don Henderson: Between 1975 and 1977, Henderson served as Mayor of El Paso. He also served on the Housing Authority’s Board of Commissioners. During his time as Mayor, Sun Metro was created, enough funds were secured to complete the North/South Freeway, and the right of way for the extension of North Loop to Hawkins was cleared.

James Peak: James Peak has fundraised for health care institutions, higher education institutions, religious organizations, museums and other non-profit organizations across the United States. Between 1989 and 1991, Mr. Peak was employed as the president of the Providence Memorial Foundation where he

established a fundraising program for the hospital. Just after two years after the Foundation’s formation, Mr. Peak raised over $1.5m from individual and corporate donors. He also worked for The University of Texas at El Paso as a development officer, and once served as president of the El Paso County Historical Society.

Mayor Bert Williams: Mayor Williams was born in El Paso’s Segundo Barrio and graduated El Paso High in 1942. As Mayor, Williams had the Franklin Canal fenced in and directed the city attorney’s office to file a lawsuit against ASARCO that led to the mandatory testing of air and soil. Williams also improved public housing in El Paso by ensuring that it was fairly and equitably distributed throughout the city. Furthermore, he was instrumental in expanding the city’s park system.

Since 1961, the Hall of Honor Banquet has recognized men and women who represent the best of El Paso. These individuals of distinction and passion have contributed to the advancement of the Borderland through their work in development, education, civic engagement, law, medicine, and history.

Tickets are $100 and are now on sale. For more information, please contact Robert Diaz at 915-533-3603 or atinfo@elpasohistory.com.

Since 1954 the El Paso County Historical Society has been a driving force in the historic scene of El Paso. EPCHS strives to foster research into the history of the El Paso area; acquire and make available to the public historic materials; publish and encourage historical writing pertaining to the area; and to develop public consciousness of our rich heritage.
Previous El Paso County Historical Society Statement on Union Plaza Neighborhood Next Photos: Upstairs Theater Collection.