Karma Deane and Her Dance Studio 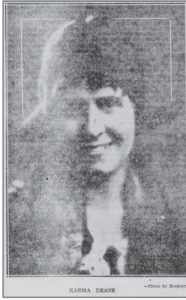 Karma Deane was a prominent and well-known dancer and instructor in El Paso and throughout the country until her death here in 1959. Deane was born in Waco, Deane came to El Paso at a young age with her mother, Maud in the 1930s. Maud worked with W.W. Westrup in his photography studio and later Deane adopted his daughter, Laurita Westrup who was also a well-known dance instructor. Deane studied under some well-known dance instructors. Deane studied under Theodore Kolsoff in Hollywood, California, and Dolph Bolm of the Russian Imperial School of Dancing. Deane also trained with  Micheal Fokin of New York City, Angel Cansino of New York. Deane also was taught by Edward Cansino, father of actress and one-time princess, Rita Hayworth. Deane was one of the founders of the Fortnightly Club, a dance group.

Deane opened her own studio was on her home on Mesa, a lot of her students went on to rose to prominence. Jimmy Hicks “Scott Douglas” who performed with the English royal ballet during the coronation of Queen Elizabeth II, Jake Ehrlich, and was a mentor of Luz Villalobos, who appeared as a dancer on the film “The Greatest Show on Earth”. Deane presented a Spanish Revue to Eleanor Roosevelt, who praised her in her “My Day” Column.

Deane and Laurita, both ran the studio, with several instructors, they taught in Fort Hancock, Fabens, Ysleta, Alamogordo, Truth or Consequences, Hot Springs, and Carlsbad. Deane also uses to put an annual ballet program on at Liberty Hall. Deane also accompanied one of her students, Bessie Petersen, who won a Hollywood contest, the prize was a  studio contract to Hollywood and got to meet Bing Crosby. Deane wrote about her meeting with Crosby in her scrapbook which is at the Main Library. Deane also had studios on Austin street in El Paso and at the old Catholic Community Center. The center was where Cathedral High School is now.

In 1936 Deane and her dance group put on a pageant to honor the opening of the first Children Library in the U.S. for the El Paso Women’s Club. Deane also was the only woman to serve on the Sun Carnival board at one time and was the social chairman. Deane and Laurita use to design and chronograph pageants for the Sun Carnival in its early days.

Since 1954 the El Paso County Historical Society has been a driving force in the historic scene of El Paso. EPCHS strives to foster research into the history of the El Paso area; acquire and make available to the public historic materials; publish and encourage historical writing pertaining to the area; and to develop public consciousness of our rich heritage.
Previous Risinger Photo Studio photos Next Louise Seymour: The Lady Rancher from Canutillo