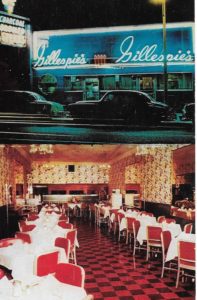 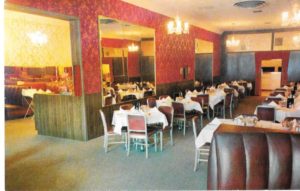 Gillespie Steak House was established in Five Points  in 1946 on 2810 Montana. Gillespie opened the Empire Club in 1959 on 2814 Montana. Gillespie mother,Stella was the manager of the steakhouse. Gillespie also operated Wyoming inn on 916 Wyoming Street, Gillespie’s Chicken House on 2810 N.Copia. The Gillespie Steakhouse was named Gillespie Grill and it was also named for King’s Way for a short time. In 1963  both the steakhouse and empire club was damaged by a fire, but it was rebuilt in the same location. In 1968 the new reconstructed Empire Club was expanded to include the red room, a room for private banquets and additional room for dining . In 1969 the Green Room was opened in the Empire Club and later was used for a  dinner theater. Gillespie worked for the railroad after WWI. Gillespie started providing an ice cream and beverage service. Gillespie also founded the Officer’s Club which was located in  Blumenthal Building in Downtown El Paso. Gillespie also catered for the cast of the movie, Giant when they were shooting in Malfa.

Gillespie also developed a catering service and his projects including providing food and beverage services at Washington Park, Ascarate,  and the County Coliseum . Gillespie also bought a charter airplane and it took members on trips around the world. Gillespie appointed Polly Harris to head the Air travel services for the empire club in 1968.

He was joined by his wife, Tommie, a nurse. She managed the Empire Club and the Steakhouse. She developed menus and oversaw catering, food and beverage services projects.After Gillespie death in the 1980s, she continued to run the business until the steakhouse and the Empire Club was closed in 1986. The building was razed to make way for a bus station. Tommie was also a painter and she died in  2013 at the age of 100.

Since 1954 the El Paso County Historical Society has been a driving force in the historic scene of El Paso. EPCHS strives to foster research into the history of the El Paso area; acquire and make available to the public historic materials; publish and encourage historical writing pertaining to the area; and to develop public consciousness of our rich heritage.
Previous Anna B. Newman: First Curator of the El Paso International Art Museum. Next Notable Women in El Paso History from the 1920s-1970s : Educators and Activists.