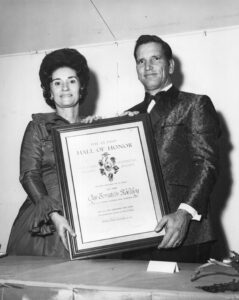 The El Paso County Historical Society would like to express our condolences to the family, friends, and many fans of Leon Claire Metz who passed away Sunday, November 15, 2020. Leon was a past-president of the Society and well-loved and respected, not only by the Society but in the community that he chose to make his home.

Following is a Winter 2003 Password article about Leon Metz written upon his induction into the El Paso County Historical Society Hall of Honor:

El Paso owes the presence of its distinguished author, storyteller, and historian, Leon Claire Metz, to the Air Force and to the stories of the West which proliferated in young adult reading throughout the third and fourth decades of the last century. As a young adult, Leon arrived in El Paso with a head full of the tales of the “Old West” which had fascinated him since the days of his youth. He still tells the story that The Saga of Billy the Kid by Walter Noble Burns had had a very strong influence on him. It was a love he was never to lose, and one which led him to the position that he maintains today.

Leon was born in Parkersburg, West Virginia in November of 1930. He earned his diploma from high school but the prospect of college was never entertained. Like many young men of his era, his thoughts were of military service. But also like many young men, he wanted a branch of service which would take him away from the home town that had been his world. The Air Force, with its promise of being stationed in San Antonio, suited Leon perfectly and being stationed at Biggs Field after basic training allowed him to explore the West that had piqued his curiosity and interest.

After his stint at repairing propellers for the Air Force, Leon left the service and went to Los Angeles, but found it not to his liking. He returned to Parkersville, but jobs were not to be had there. Leon then decided to return to El Paso. Here he tried several fields of endeavor-grocery stocker, policeman, milkman, and a senior operator at Standard Oil and Refining. It was while he held this job that he began to write and he started reviewing books for the El Paso Times. Later he became the book review editor for the Times.

He began work on his first book, John Selman, Texas Gunfighter which was edited by Dr. C. L. Sonnichsen. At that time, Dr. Sonnichsen was chairman of the English department and dean of the graduate school at Texas College of Mines and Metallurgy, now the University of Texas at El Paso, and it was through him that Leon met many of the “literary lights” who at that time were in El Paso-primarily at the college and involved with the newspapers.

In June of 1970 he married the former Cheryl Schilling, a speech therapist who specializes in the treatment of autistic children. Between them they have four children: Marlene, Samuel, Matthew, and James, and now have three grandchildren and one great­grandchild.

The University of Texas at El Paso beckoned, and Leon became the university archivist. He moved on to serve as treasurer of Tom Westfall’s campaign for mayor, then became the executive assistant to the mayor upon Westfall’s election. This was followed by the post of executive assistant to President Haskell Monroe, president at the University of Texas at El Paso. Following this position, he became public affairs officer at MBank.

Leon never strayed far from our city’s history and the history of the Southwest. During all this time his mind and his pen have been active in the service of the American West: of El Paso and the Southwest. Over the years, he rendered significant service to the El Paso community through his many published works on El Paso history and his tireless promotion through countless civic speeches, lectures, newspaper columns, and radio and television appearances. He has advanced the cause of historical awareness at all levels in the El Paso area. Leon has also written introductions, forewords, and reviews for many books. For his civic services he has received numerous awards from literary and historical groups, he city’s Conquistador Award, and numerous other civic, military, and educational awards.

He is the acclaimed and award-winning author of dozens of historical articles primarily for western magazines and journals, and has published more than sixteen books on western history. He has been a television commentator on western subjects for the History channel, the Arts & Entertainment channel, the Discovery channel and the Public Broadcasting System, and has written historical and biographical articles for the Handbook of Texas, the American National Biography and The Encyclopedia of the American West.

His many affiliations include his service on countless committees, boards, and commissions, as well as his service as president of many organizations-among them the El Paso County Historical Society, Western Writers of America, Discover El Paso, El Paso Tourist and Convention Bureau, El Paso Arts and Humani­ties Council, The Mission Heritage Association, New Mexico Book League, Texas Historical Commission, El Paso Museum of History, and The El Paso Corral of the Westerners.

…Leon Metz, more than any other person I can think of, has over the decades through his acclaimed books, articles, lectures, media appearances, programs and other efforts, kept history out front in El Paso, not buried in the past. His contributions range from describing Wild Bill Hickok as “having a high effeminate voice, but no one ever mentioned [it] to him” to his scholarly book Border. . which was the winner of many literary prizes. The Internet search engine, Google, brings up thousands of references to Leon and the Internet out-of-print book­sellers list close to 300 copies of his books.

El Paso has surely gained from the continued presence of Leon Claire Metz.

Since 1954 the El Paso County Historical Society has been a driving force in the historic scene of El Paso. EPCHS strives to foster research into the history of the El Paso area; acquire and make available to the public historic materials; publish and encourage historical writing pertaining to the area; and to develop public consciousness of our rich heritage.
Previous Louise Dietrich : A Pioneer Nurse, El Paso Suffragist, Women’s Rights Leader Next El Paso County Historical Society Honors Four El Pasoans with Prestigious Award