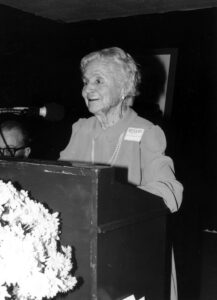 During her long life as an El Pasoan, Mrs. Perrenot dedicated much of her time and treasure to the betterment of her beloved El Paso. She was a charter member of the Junior Service League, now the Junior League, and served as president of that organization. She was instrumental in the organization of the much-heralded Social Service Exchange sponsored by the League, which was the first clearinghouse for social services offered in the community. In 1967 she was honored by the Junior League of El Paso with its Outstanding Sustaining Volunteer Award.

Sharing her father’s great love for books, she served several terms on the board of trustees of the El Paso Public Library, serving twice as its president. She received the Teotehuacan Award from the El Paso Chamber of Commerce in 1972 for her efforts in establishing the Southwestern Collection at the downtown library and in 1973 was a recipient of the Conquistador Award from the city in recognition of her work for the library. When she left the library board she was named chairwoman Emerita. In addition to the time and effort devoted to the library, she funded the Lea-Hertzog Room at the downtown library and donated the land on Belvidere Street on which the Westside Library branch was constructed.

She was dedicated to El Paso and involved in numerous organizations. Mrs. Perrenot twice served on the City Charter Commission for El Paso and was a board member and past president of the Planned Parenthood Association as well as the Mothers’ Association for the Radford School for Girls. She participated in Mission 70 at the University of Texas at El Paso and was a member of the Colonial Dames, Las Comadres, The El Paso County Historical Society, the El Paso Opera Guild, the YWCA, the El Paso Museum Association, and the First Presbyterian Church.

Even in death, she contributed to the community by bequeathing the family home on 603 W. Yandell to the El Paso County Historical Society for use as its headquarters and as a research facility. She left her father’s extensive library to the University of Texas at El Paso where it will be utilized by generations of future scholars.

Since 1954 the El Paso County Historical Society has been a driving force in the historic scene of El Paso. EPCHS strives to foster research into the history of the El Paso area; acquire and make available to the public historic materials; publish and encourage historical writing pertaining to the area; and to develop public consciousness of our rich heritage.
Previous El Paso County Historical Society begins a series of discussions with dinner and talk on July 23, tickets are limited Next Virtual history events taking place in the month of August