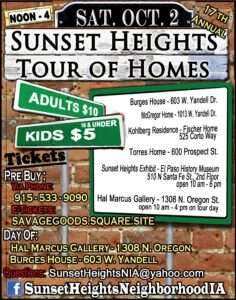 Funds raised by the event go to the Sunset Heights Neighborhood Improvement Association used to assist neighborhood residents with their properties, provide neighborhood activities, and maintain the historical integrity of the neighborhood.

Here’s everything you need to know:

Featured homes and locations on the tour:

There are six locations on this year’s tour of homes. Five are located in the Sunset Heights neighborhood and one at the El Paso History Museum. The museum features an exhiit on the second flour focusing on Sunset Heights.

Sunset Heights is one of the first planned neighborhoods in the state; some of the homes on this year’s tour date back to the early 1900’s and may not be handicap accessible. 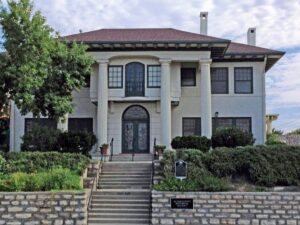 The Burges House, current headquarters of the El Paso County Historical Society, was built in 1912 for Richard F. Burges.

The home is an American Foursquare and was built by J.E. Morgan. Additions to the home were designed by Mr. Otto Thoman and done in 1927.

Mr. Burges was a local attorney and prominent civic leader who drafted El Paso’s first city charter, lobbied for the construction of Elephant Butte Dam, was part of an expedition that led to the establishment of Carlsbad Caverns as a National Monument, and served in World War I, attaining the rank of Major. He lived in the home until his death in 1945. His daughter, Jane Burges Perrenot, lived in the home until 1986. It was then bequeathed by Mrs. Perrenot to the El Paso County Historical Society. 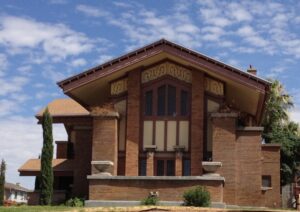 The house at 1013 W. Yandell Dr. was designed and built by Henry Trost for his primary residence. It was begun in 1908 and finished in 1909.  Mr. Trost occupied the residence with his sister Matilda and two other brothers.  Henry Trost died in 1933 on the front porch.  The remaining Trost’s lived there until 1948, at which time the Grossbecks bought it.  The Grossbecks subsequently sold it to Malcom and Bobba McGregor who moved into it in the summer of 1958.  The home is still occupied by a member of the McGregor family. 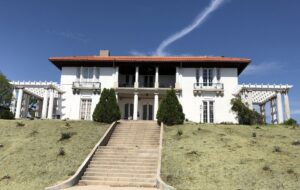 The Kohlberg house was constructed in 1910 for Ernst and Olga Kohlberg.  Olga Kohlberg is the woman for whom Kohlberg elementary is named. She is famous for being a woman’s rights activist of her time, and is reported to have founded the first kindergarten in Texas.  Architect, Henry Trost, designed the house in the architectural style of Mediterranean Revival. The roofing tile, exterior finish, exterior doors and windows, and cement plaster finish are original to the house.  The landscaping and first-floor interior rooms have been restored back to their original condition from 1910.  Original interior features include hardwood floors, radiators, light fixtures, staircase, pocket doors and fireplaces. Be sure to note the circa 1910 photographs in the hallway. These photographs depict the first floor rooms in their original condition.  This house also served briefly as the Mexican Consulate.  – Information courtesy of El Paso County Historical Society and the Fischer Family. 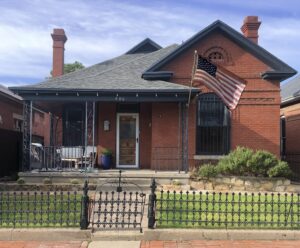 This house is located at the gateway to downtown near the Prospect Bridge.  Built in 1902, it was the original home of Mr. and Mrs. Waddell.  Mr. Waddell was a railroad conductor; many of his penciled notes were found under the original back porch and donated to the UTEP library’s rare book section.  The floors of the home are original and made of long leaf yellow pine.  The original roof was covered in wood shingles.  The house has 1 full chimney with a fireplace and 4 half chimneys which once connected to stoves – coal delivered by wagons were used for heating and cooking.  The home is now lovingly maintained by the Torres family.

Enjoy a look at the early decades of the development of what is now known as Sunset Heights.  Take a step back in time through this magical exhibit which includes treasured objects meticulously sourced from the permanent collections of The El Paso Museum of History and The El Paso Museum of Art.

Located northwest of downtown Sunset Heights is one of the first historic suburban neighborhoods in El Paso.  In the 1880’s, John Fisher Satterthwaite purchased the land which is about one mile long, and one and half miles across.

The name, “Sunset Heights,” was given to the area in 1901, when the El Paso Herald held a contest for the best name for the neighborhood. The architecture is a medley of styles: from the great houses designed in American Foursquare to modest brick bungalows. In 1984, with the help of longtime Sunset Heights resident, John Karr, the neighborhood received historic designation.   This exhibit focuses on themes of The People, Religion, Politics, Architecture, and Public & Private Educational Significance. 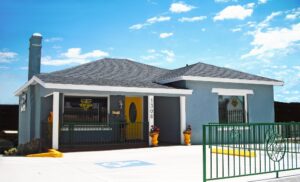 This blue house on Oregon Street between River and California was probably built in the mid-1950s. It was built as a single family home. It has beautiful oak floors and the interior is painted in bright fun colors. This is a great opportunity to experience the fun inviting gallery with a neighborhood feel.  – Information courtesy of Hal Marcus

Tickets may be purchased ahead of time or the day of the tour at the Hal Marcus Gallery or at the El Paso County Historical Society.

Tickets may also be purchased online at Savagegoods.Square.Site.

Since 1954 the El Paso County Historical Society has been a driving force in the historic scene of El Paso. EPCHS strives to foster research into the history of the El Paso area; acquire and make available to the public historic materials; publish and encourage historical writing pertaining to the area; and to develop public consciousness of our rich heritage.
Previous ‘Lost Restaurants of El Paso’ book sale event at 101-year-old former Texaco Service Station Next EPCHS announces 2021 Hall of Honor selection