by EPCHS in Events, Latest, News & Events, _Frontpage Below the Fold |

The local record of El Paso’s history is getting richer as Jo Mapel, a member of the Charles Morehead family, comes to the city Saturday, April 23, to donate deeds, maps, photos, furniture and hundreds of documents from the Morehead family estate to the El Paso County Historical Society. 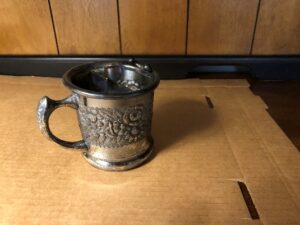 The collection includes family letters, a history of the Morehead family by Charles Morehead, a journal of Morehead’s visit to El Paso with O.T. Bassett, Morehead’s visit to Washington, D.C., to present a proposal for the Pony Express to President James Buchanan, early maps and photos of El Paso, the land sale to Fort Bliss at its present location, Morehead’s bedroom suite from the late 19th century and other material important to El Paso’s early history.

Mapel will give a presentation on the donation describing the significance of the items and the people involved at 9:45 a.m. Saturday, April 23, at the Burges House, 603 W. Yandell Drive. The event is free and open to the public. The Morehead furniture and some of the documents and photos will be on display.

Charles R. Morehead was an El Paso pioneer and banker born in Richmond, Missouri, on Feb. 28, 1836.

Morehead made a trip to Texas and New Mexico in November 1863, and in February 1880, in association with O.T. Bassett, bought 400 acres of land in El Paso from Judge Joseph Magoffin and contracted to bring the Texas and Pacific Railroad to El Paso. 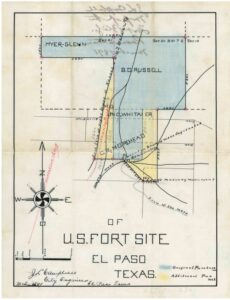 He moved to El Paso in 1881, where he worked in banking until his death. He was the organizer and president of the State National Bank of El Paso, the first bank established in the city, and remained president and head of the board of directors until his death.

From 1893 to 1894, he served as president of the city’s board of education, organized the public school system in El Paso, and was elected mayor in 1903. Morehead Middle School is named in his honor.

The El Paso County Historical Society is able to accept this important donation due to grants provided by the El Paso Electric Co. and Humanities Texas.

Take a look at a few more items:

Since 1954 the El Paso County Historical Society has been a driving force in the historic scene of El Paso. EPCHS strives to foster research into the history of the El Paso area; acquire and make available to the public historic materials; publish and encourage historical writing pertaining to the area; and to develop public consciousness of our rich heritage.
Previous Events to celebrate Women’s History Month in El Paso Next New exhibit centers on El Paso & World War II at El Paso County Historical Society