Manrique R. Gonzalez, pioneer agricultural engineer in the U.S. Southwest and northern Mexico who gained fame as a developer of the pinto bean, died Monday at Providence Hospital of an illness. 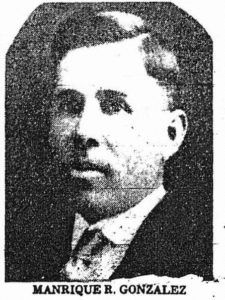 Mr. Gonzalez, 96, gained prominence in this country just after World war I when, as a county agricultural agent in Las Vegas, N.M., he and two associates began experimenting in the cultivation and hybridization of legumes, one of which resulted in the pinto bean.

According to a son, Dr. I. Ernesto Gonzalez of San Francisco, Mr. Gonzalez became associated with U.S. Agriculture Department Experimental division after his graduation in 1913 from Utah State Agricultural College.

After a number of years of research and experimental activities in New Mexico and Colorado as a county agent and with ties to the U.S. Agricultural Department, Mr. Gonzalez went to Mexico where he developed the horticultural system for that republic and for the state of Chihuahua.

Actually, according to Dr. Gonzalez, who was in El Paso Monday to be at his father’s beside, the elder Gonzalez first became widely known in much of Mexico and in parts of the U.S. Southwest for his efforts on behalf of American Mormons who were living in Mexico at the time of the Revolution.

Mr. Gonzalez had been educated and reared in his youth by Mormons in Colonia Dublan, Chihuahua, where he had found refuge after leaving his home at the age of 14 in Nadadores, Coahuila, according to Dr. Gonzalez. When the Revolution began, Dr. Gonzalez said, his father, having rapport with Pancho Villas’ forces, was able to provide for the safety of Colonia Dublan Mormons as they left the country to come to the Unites States.

In his Nadadores adobe home, the boy was one of a family of 16. When he came to the colony of Mormons, they sent him to the Colonia Juarez Academy (run by the Mormon Stake). He worked to pay for his studies and keep, and then went to Utah State, Dr. Gonzalez said in recounting the background of his father.

For half a century, then, Mr. Gonzalez continued his research and experimental activities which brought him fame. On his retirement, he went to live in Colonia Dublan.

Dr. Gonzalez, who is chairman of the department of nuclear medicine and chief of pathology at French Hospital in San Francisco and is professor of medicine at the University of California there, is one of six surviving children of the deceased and his widow, Mrs. Regina P. de Gonzalez.

The others are a son, Roberto Gonzalez of Hermosillo, Sonora, Mexico, and daughters, Mrs. Lilia Brown and Mrs. Regina Ayala, both of El Paso, and Mrs. Elvira Avena and Mrs. Catalina Thompson, both of Colonia Dublan.

The body of Mr. Gonzalez will be on view at Harding Orr & McDaniel Pershing Chapel Tuesday and Wednesday. Funeral services will be Thursday at 2 p, at the Church of Jesus Christ of Latter Day Saints in Colonia Dublan. Burial will be in Colonia Dublan Cemetery.

Since 1954 the El Paso County Historical Society has been a driving force in the historic scene of El Paso. EPCHS strives to foster research into the history of the El Paso area; acquire and make available to the public historic materials; publish and encourage historical writing pertaining to the area; and to develop public consciousness of our rich heritage.
Previous El Paso 1880-1900 Next Ysleta School History Series: Old Stone Courthouse