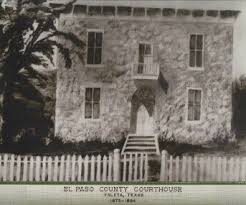 The Old Stone Courthouse was built in 1882 when Ysleta was the county seat. It didn’t act as the courthouse for very long because  Ysleta lost the county seat election  of 1883  to El Paso. The Ysleta school district moved into the old courthouse in 1884. In 1915, after a successful bond election, construction started for a new school building. The old courthouse was torn down  and the bricks was used to build a new building on Alameda and Harris streets, where RFK Pre-K  is now, but  that it for another post.

Prior to 1882 school was conducted in private residences. There was a private school ran by George Baylor and his wife in 1881. Mr. Baylor was a Texas Ranger who opened a Texas  Ranger’s Headquarters in Ysleta in 1879. The first public school opened in fall of 1882 with 30 students.

When the district moved into the courthouse, John W. Eurbank, who later  went on to serve as county surveyor, was the school master. Some of his  students included Florence Vilas Stevenson, her husband, Dr. H.E. Stevenson, and George Buchanan .

Since 1954 the El Paso County Historical Society has been a driving force in the historic scene of El Paso. EPCHS strives to foster research into the history of the El Paso area; acquire and make available to the public historic materials; publish and encourage historical writing pertaining to the area; and to develop public consciousness of our rich heritage.
Previous 1976: Developer of pinto bean dies in El Paso Next Ysleta school history series: San Jose, Texico and old Ysleta grammar Schools