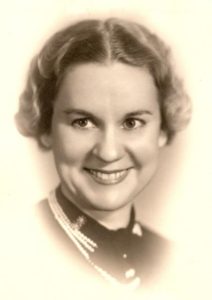 Elizabeth “Betty” Luther was born in Bell Buckle, Bedford County, Tennessee, one of three children. She was daughter of Frank Streed Luther, a descendant of American Revolution hero James the “Regulator” Emerson, and Irene Whitaker a descendant of Matt Martin , another hero of the American Revolution. After her father’s death, Betty and her family moved to El Paso where she graduated from El Paso High School and later Sul Ross. She also attended the Teacher Normal held at the old Ysleta Grammar school building on Alameda and Harris Street (now RFK Prek) in 1916. She taught for 10 years in the Ysleta and El Paso School Districts.

She joined the  El Paso Herald Post in 1913 under editor Wallace Perry as a society page editor until she became  a general assignments reporter. She also played a role in  the arrest of  Dr. Wolfgang W. Ebell, a German doctor who was found guilty of espionage  during World War II.

Luther wrote about local historical figures, such as Jake Ehrlich, and about the history and customs of the Tigua Tribe.  She wrote about her family and expressed her personal opinions about different issues. Luther also wrote advice columns.

Luther  moved and worked as a reporter in Birmingham, Alabama. After she came back to El Paso she wrote opinion columns for the Herald-Post. She was going to leave the news business because of her struggle with rheumatoid arthritis but the El Paso Herald Editor, Ed Pooley, created the “Ann Carroll” column. As she struggled with her illness, she put all of her energy into her columns. The column included advice from Luther and her political views, among other items. Luther also wrote about the “good ol’ days” of El Paso.

Luther helped found the El Paso Rheumatoid Arthritis Association. A quilting group was also named in her honor. Her column was read by thousands of El Pasoans, but many did not know her as “Ann Carroll” and did not know about her battle with RA. Despite this, she fought to write her column, even when she no longer had the ability to write or use a typewriter. She wrote the “Ann Carroll” column until her death in 1977.

She was a pioneer in the newspaper industry, paving the way for other pioneers in the field such as Virginia Turner, the first female managing editor at the Herald-Post, and Barbara Funkhouser, the first and only woman editor of the El Paso Times. Here at the El Paso County Historical Society, at 603 W. Yandell, we have two collections filled with scrapbooks of “Ann Carroll” columns.

Another interesting fact about Luther was that her sister, Frank Luther Blower was a professional pianist who played with and went on a  concert  tour with renowned pianist, Elizabeth Garrett daughter of  Pat Garrett, who wrote the state song for New Mexico.

Since 1954 the El Paso County Historical Society has been a driving force in the historic scene of El Paso. EPCHS strives to foster research into the history of the El Paso area; acquire and make available to the public historic materials; publish and encourage historical writing pertaining to the area; and to develop public consciousness of our rich heritage.
Previous Event June, 25: Find Your Legacy: Genealogy Workshop Next Curator’s Corner: Promotional items