Who can resist the allure of a free T-shirt?
From shoehorns to hacky sacks, icepicks to mouse pads, promotional items are such a ubiquitous part of our consumer society that they are often overlooked. Whether they are the last surviving remnants of a short-lived business venture, mementoes from an iconic local organization, or collectibles from an established national brand, promotional items can serve as interesting historical curiosities and as resources for historical research.
Recent accessions at the EPCHS attest to the variety and value of promo items as historical artifacts in archive collections.
This image from a 1941 American Airlines promotional calendar invites us to “Visit the Southwestern Sun Country This Winter.” 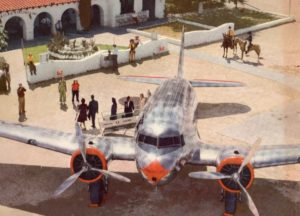 Donated by Karen Smith, this calendar image belonged to her father John F. Hicks who worked as a pilot for American Airlines. Mr. Hicks was based in El Paso when he flew the Mexico City via Monterrey route during the 1940s. Although he passed away in 2011 at the age of 102, his daughter says that Mr. Hicks reminisced fondly about his time in El Paso until the very end.
The image was created by Ivan Dmitri, an artist renowned for his early experimentation in the field of color photography; it features the American Airlines terminal at the El Paso International Airport in 1940. Passengers & crew disembark from a sleek American Airlines plane to be greeted by smiling bystanders, including two cowboys on horseback. A carefree & joyous image in vibrant color, this picture successfully captures a time in history when commercial air travel was a thrilling adventure, rather than a grueling Orwellian nightmare.
Not all ads are graphic in nature; some are designed to be purely practical. Such is the case with our next promotional artifact.
Many of the natty and fashionable men of early twentieth century El Paso patronized the trendsetting clothing shop of Sol I. Berg, Inc. And, during the late 1920s, some of those trendsetters would have received this pocket-sized memorandum book in gratitude for their patronage. This chic yet functional little promo item advertised the fact that Sol I. Berg was a proud retailer of the high-end Schloss Bros. line of men’s clothing. 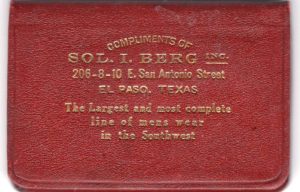 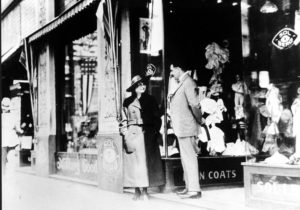 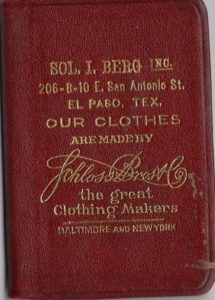 Solomon Isaac Berg, a German immigrant, came to El Paso in 1899 to work for B. Blumenthal’s clothing store. Shortly after arriving in El Paso, Mr. Berg met his future wife Jeane ‘Jennie’ Weiler, a Swiss lass who was visiting friends in Juarez. The couple married on January 10, 1904 at the home of Mr. Blumenthal & had two children, Julius & Florence.  In 1903, he opened his own clothing store, Sol I. Berg Inc., on the site of what would eventually become the Hotel Paso del Norte on S. El Paso Street. Mr. Berg quickly became regarded as a well-known and well-respected purveyor of fine clothing for the well-dressed men of El Paso. Even El Paso police officers wore uniforms provided by the Sol I. Berg emporium. In January 1910, the success of his business led him to relocate his shop to 206 E. San Antonio Street. Mr. Berg was active in civic & charity works around El Paso, including the Scottish Rite Temple, Temple Mt. Sinai, the Kennel Club & the Chamber of Commerce. Mr. Berg’s clothing company went bankrupt in April 1930, and he retired. Relatives, including his brother Bernie & his son Julius, then moved their own clothing store, The Berg Co., to the same E. San Antonio Street location where it remained in operation until 1940. Mr. Berg died at his home ‘Quinta Berg’ in Ysleta on May 3, 1935 at the age of 66. The following year, his widow Jennie sold ‘Quinta Berg’ to the Sisters of the Good Shepherd and married the founder & president of the Popular Dry Goods Co., Adolph Schwartz.
We now shift away from the fundamentally practical to the entertaining & somewhat sentimental side of promotional items with a collection of eight festive Christmas booklets bringing us holiday greetings from Christopher’s Brace & Limb Co. 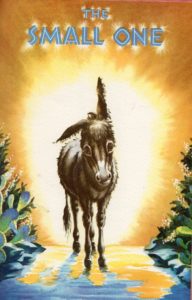 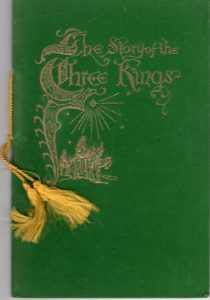 Merle Eugene ‘Chris’ Christopher was born on August 19, 1920 in Tulsa, Oklahoma. As a child, he was stricken with a bone infection that left him permanently crippled and inchronic pain. He studied brace and artificial limb making & fitting at UCLA. He began working as a professional in the brace and limb making business in Oklahoma in 1937. In the early 1940’s, he worked at the Carrie Tingley Hospital for Crippled Children in Hot Springs, New Mexico (now Truth or Consequences). In 1944, Mr. Christopher came to El Paso and started his own business, Christopher’s Brace & Limb, at 815 Cedar Street in Five Points. Even after he relocated to El Paso, he continued to be actively involved in work at the Children’s Hospital for the duration of his career. It is easy to imagine that his own disability and his innate empathy for his young hospital patients & his customers is what led him to be such a popular and successful prosthetist and brace maker. Mr. Christopher became certified by the AOPA (the national trade association for orthotic and prosthetic professionals) in 1949. He moved his successful business to 2231 Montana during the mid-1950s. And by 1964 he was established at his final location at 314 East Yandell. Although he relinquished ownership in 1969, Mr. Christopher remained active at the shop where he served as chief orthotist-prosthetist until his death in 1974.
An apparent tradition at Christopher’s Brace & Limb, these unique little ‘Christmas cards’ were popular forms of advertising during the 1950s. The Christmas-themed booklets were published and printed; then, volumes were purchased & personalized by businesses across the country to be distributed to their customers. The booklets contained Christmas poetry, short-stories, or even information about Christmas shrines around the world. They often featured the work of famous artists/illustrators such as Nell Stolp Smock and Lee Mero. Lee Mero was especially well-known for his Christmas-themed illustrations; two of his works, One Christmas Back in Grandfather’s Time & Snowbound: A Winter Idyl, are featured in this collection. 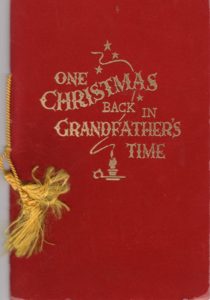 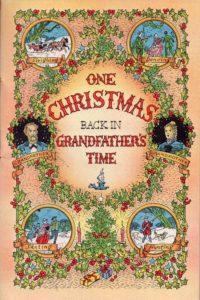 Promotional items run the gamut from being utilitarian to decorative, from entertaining to just plain quirky. Whatever their nature, these distinct forms of advertisement fill a valuable role in archives.

Since 1954 the El Paso County Historical Society has been a driving force in the historic scene of El Paso. EPCHS strives to foster research into the history of the El Paso area; acquire and make available to the public historic materials; publish and encourage historical writing pertaining to the area; and to develop public consciousness of our rich heritage.
Previous Betty Luther: The Woman Behind “Ann Carroll” Next Deadline Extended: Submit Your Hall of Honor Nominations by July 20!