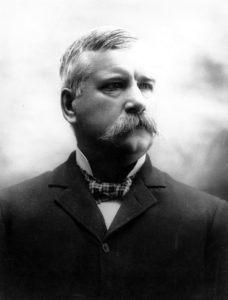 Dr. Vilas was born on Sept. 11, 1847, in Red Creek, Wayne County, N.Y. He was one of seven children of Dr. Calvin Vilas and Mary Catherine Ford. The family moved from New York to Wisconsin in 1848 when Vilas was 1 year old, and from there to Lake City, Minn., when he was 10. In 1863, when he was but 16, he enlisted in Company E, Minnesota Volunteer Infantry, and served until the end of the Civil War, achieving the rank of corporal.

He married Mary Ramsdell in 1868, and the couple had three children: Katherine, who married Joe Hixon of Fresno, Calif.; Florence, who married Dr. Herbert E. Stevenson, later an associate of Dr. Vilas; and Walter, who followed his father into the medical profession. Mary died in 1905, and the following year, Dr. Vilas married Lorena C. Matthews of El Paso, who survived him.

Vilas graduated from Rush Medical College in Chicago in 1879. He began his medical practice in Rochester, Minn., where he became a lifetime friend of Dr. William Mayo, father of the famous Mayo brothers, who set up their world-renowned clinic there. Dr. Mayo came to visit Dr. Vilas in El Paso for about 10 days in 1907. The El Paso Herald of Feb. 2, 1907, reported that Dr. Vilas’ first surgery after leaving medical school was performed on his friend, “a story which Dr. Vilas tells with some gusto yet, telling of his own stage fright in the matter.”

Dr. Vilas came to Ysleta, then the El Paso County seat, in June 1881, as assistant customs collector, and he also set up a medical practice. He moved to El Paso when it became the county seat in 1883. The Vilas family first lived on the corner of Stanton and Rio Grande streets, across from the former Hotel Dieu hospital. They later moved to the corner of Wyoming and Oregon.

He became deeply involved in the activities of the medical profession in El Paso, serving as city and county physician. For his services, the county paid him the handsome sum of $50 per month.

He was president of the El Paso Medical Society in 1903, president of the El Paso Board of Health and was elected secretary-treasurer of the American Anti-Tuberculosis League. He also held the position of surgeon for both the Mexican Central and the Santa Fe railroads. For many years, he was chief of staff, surgeon and professor at Hotel Dieu hospital and school of nursing. In these positions, he was involved in many interesting activities. He is credited with giving the first diphtheria shots in El Paso and with performing the first appendectomy in the area in 1884.

Dr. Vilas was half of a two-man delegation to the American Anti-Tuberculosis League’s convention in Atlanta in April 1905, where he used a novel approach to win the next year’s meeting for El Paso. Despite having arrived at the close of the convention, Vilas and Zach Cobb pressed the flesh in an effort to meet every physician present, and they distributed 500 sombreros bearing the message “El Paso – Health Belt – 1906.”

As president of the board of health, one of his duties was to inspect the heating and ventilating systems of schools. He began the inspection of milk and diligently enforced other pure food laws. When gunslinger John Wesley Hardin was shot by John Selman, Vilas was one of the physicians assigned to perform the autopsy, which reported that Hardin had been shot in the back.

Dr. Vilas’ duties with the board of health were not performed without some controversy. In 1898, the El Paso Herald declared itself “at odds” with Dr. Vilas’ city board of health, which had asked the newspapers only to use officially sanctioned reports of cases of smallpox in the city. The newspaper refused to agree to this, and it wrote about its difficulty obtaining the official reports from Dr. Vilas. The article also suggested Dr. Vilas was not being fully forthcoming about the full scope of the problem, asking, “Was Dr. Vilas simply misinformed, or — ?”

Dr. Vilas was described as a stocky, handsome man of compelling personality, who left no doubt as to what he meant, and on occasion was known to use profanity to make a point. On one occasion, Dr. Vilas was being admonished by the administrator of Hotel Dieu for his swearing. He answered, “You are right, Sister. I shouldn’t swear but, damn it, something has to be done about those damned nurses!”

Dr. Vilas was involved in many of the city’s social and civic activities. In 1891, he was nominated for the office of mayor by the Republican party, but was defeated by the Democratic candidate, Richard Caples, 735-596. He was commissioned by Texas Gov. Charles Culberson as a major and surgeon in the first Texas Volunteer Infantry in the Spanish-American War, and served for six months. Upon his return to El Paso, he was asked to help obtain a charter for the Humane Society. This was understandable since, according to his family, he was quite fond of animals and had a number of pets, including a three-legged frog. He was also a charter member of the Pioneers Association of El Paso, which was formed in 1904.

Dr. Vilas also made headlines in 1904 for his shooting skill, when, during the weekly trap shoot at the El Paso Gun Club, he tied expert shooter T.E. Hubby, hitting 23 of his 25 targets. He won a bird dog for his performance in another contest in 1902.

The interest aroused by his inspections of schools as president of the board of health led to the election of Dr. Vilas to the school board, where he served from 1904 until 1909. He was president of the board from September 1907 to April 1909. During this time, he insisted that all teachers be examined for tuberculosis so it couldn’t be passed on to the children. He also demanded that all school doors swing out in case of fire, which is now a standard regulation in all building codes.

Another high point of his tenure as school board president came in 1908. Vilas, presenting diplomas to the graduating class of El Paso High School, made a “touching scene” in handing out the award to one special student who he had long known.

“The stork brought a scrawny, ugly little girl, but the parents thought she was pretty and loved her so much that they named her Florence for the favorite daughter of the physician” who had delivered her, Vilas said. “Now, that old family physician takes the greatest delight in presenting a graduation diploma to his little Florence, and to assure her that he was the first person to see her little face.”

He gave her a kiss and a “hearty embrace” as the “audience applauded between tears and laughter.”

Dr. Vilas revealed his plainspoken manner again when he tendered his resignation as president of the school board in 1908. When a trustee said he should reconsider, Vilas replied, “I don’t. It is against my business; it is against my bread and butter that I have given my time to this board. Now that the schools are over, put someone else in my place.” He later withdrew his resignation, however.

While he was president of the school board, Dr. Vilas pushed for a new school in Mundy Heights, which was growing rapidly. The plan for the building by architects Trost and Trost was selected, along with a statement that the building would be constructed with a $25,000 budget. Thomas R. Francis Construction Company completed the new school in the spring of 1909. The board voted to name the new school Vilas. After his retirement, a portrait of Dr. Vilas was placed in the new facility, where it remains to this day.

In 1909, Dr. Vilas retired from his medical practice and moved to California. Although he was too old to enter the service in World War I, he served his country as president of the Stockton draft board until the end of the war. Dr. Vilas passed away in California at the age of 81 in 1929 and is buried with his family in Evergreen Cemetery in El Paso.

Since 1954 the El Paso County Historical Society has been a driving force in the historic scene of El Paso. EPCHS strives to foster research into the history of the El Paso area; acquire and make available to the public historic materials; publish and encourage historical writing pertaining to the area; and to develop public consciousness of our rich heritage.
Previous The Pershing Theater: 2905 Pershing Drive Next El Paso Women Pioneering Athletes: Golf