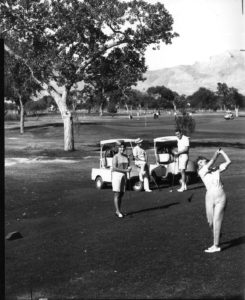 In 1926, the Tuesday Women’s Golf Club was organized at the El Paso Country Club. Charter members of the organization were Mary Morgan, Reba Armstrong, Mrs. Peyton Edward, Mrs. Ernest Hiles, Mrs. A.L. Cox, Frances Vance, Mrs. Otis Cole, Mrs. Will Ramsey, Mrs. R.W. McAfee, and Mrs. Fred Ryan. The club participated in every match, tournament, and contest that was open to women. Many prominent golfers and champions came from the club’s ranks. In 1927, Adah Hadlock, along with Reba Armstrong, founded the Women’s Southwestern Golf Association. By 1952, there were 25 clubs all over the southwest. 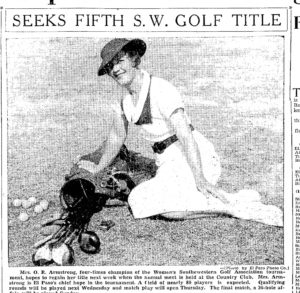 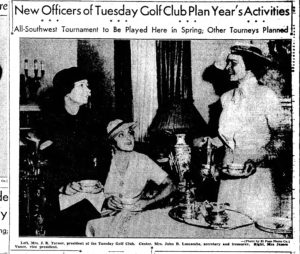 Christine Turner held the Country Club Women’s Championship for three years. Turner served as president of the Tuesday Women’s Golf Club and of the Women’s Southwestern Golf Association. Turner advanced to the finals in the Hilton Hotel Golf Tournament in 1948. In 1949, she took medalist honors at the annual women’s tournament at El Paso Country Club. Mrs. Turner won the second annual Acre Tournament held by the El Paso Women’s Golf Association, Jackie McNutt was the first winner of the tournament. In 1959, Turner won the President’s Cup Golf Tournament at El Paso County Club by 11 strokes and scored in the low 80s, which was considered a very high score. Turner also ran a independent tire dealer business along with her husband, J.R. The J.R. Turner Co. was one of the oldest independent tire dealerships in El Paso. 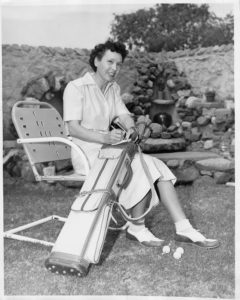 Agatha Lee defeated Christine Turner in the 1938 Women’s Country Club Golf Tournament. Turner held the title three times. Lee held a medal score of 81 in 1938 and was well on her way to winning a championship. Lee started playing golf in 1933. She began playing with her husband at Ascarate Park  and remembered  hitting balls above other visitors’ heads because the park did not have a very good space for golfing. Lee was El Paso Country Club Golf Champion 18 times. She was city champion seven times and the Ascarate Golf Course Club Champion twice. She won the Women’s Southwestern Golf Association and the Juarez Country Club Invitational championships twice each, among other accomplishments. In 1959 and again in 1965, she was the Texas Senior Champion. She also won championships in Cloudcoft and Ruidoso, N.M. Lee held records at the Anthony, Valdespino, Juarez and Ascarate golf courses, scoring in the low 70s. She held the record score of 74 at Juarez and Valdespino golf courses. Lee played in the U.S. Seniors and was a medalist when she was in her 60s. Lee graduated from Alta Vista Elementary and El Paso High School. She was also the first woman golfer to be inducted into the El Paso Athletic Hall of Fame.

Since 1954 the El Paso County Historical Society has been a driving force in the historic scene of El Paso. EPCHS strives to foster research into the history of the El Paso area; acquire and make available to the public historic materials; publish and encourage historical writing pertaining to the area; and to develop public consciousness of our rich heritage.
Previous Dr. Vilas had big impact in El Paso Next City of El Paso Once Sold Two of Its Streets to Pay the Salary of Its Marshall by G.A. Martin–March 24, 1922