El Paso women horse riders proved they could be just good as men when completing in equestrian sports. The El Paso Horse and Driving Club was founded in 1944, with Mrs. Joseph Carter  as was one of the organizers. They group put on annual horse shows to benefit charities from 1944 to the late 1960s. One of the organizations that it benefited was Thomason Hospital. Women played big roles in the organization, being involved in publicity and promotion and other social aspects of the planning for these shows. One of these women was Chella Maloney, who served as Secretary of the El Paso Driving and Ridding Club.

Women participated as riders going to back to one of the earliest horse shows organized by the El Paso Horse Association. It opened at Washington Park on November 22, 1913. At a pre-show event on Nov 22, 1913 at the Hotel Paso Del Norte, Women appeared alongside men in their uniforms and on their horses. Hildagarde Sauer won silver club in Class F of Women saddle horses and Clara Hawkins came in second place with her horse “Pat.” Mrs. U.S. Stewart was the only woman to ride right saddle. Hawkins also won in the  Women Championship class. Josephine Nations Moffitt rode “Dagomar” a horsed owned by Charles N. Bassett, Helen Win rode her horse, “Tang Girl” and Edna Colson rode her horse “Knox.” Mrs. W.L. Tooley, Mrs. J.F. Williams, Mrs. Max Weber, Mrs. A.B. Fall, Mrs. Robert Reed, Mrs. Henry Meyer, and Mrs. W.T. Dawson was selected as patroness of the show.

Mrs. James Moore Thompson (Glenn Adams) was a teacher and wife of a U.S. Calvary Officer, she won the broad jump in 1914  at Washington Park. Thompson was the only woman to ride in this category. Thompson with her horse “Jerry” jumped a wall with a width of 20 feet, a few inches under the world record, defeating all male cavalry officers including her husband, who were considered some of the best riders in the U.S. Calvary. According to Newspaper accounts she was given a standing ovation.

Some Early horse riding groups for women included a woman’s riding class sponsored on Fort Bliss, which was for wives of U.S. Service men. There was also a women horse riding club at the El Paso Country Club. The Fort Bliss class held annual horse shows, that were open to the public. Riders from the different Calvary infantries used to complete along with their wives. These shows were considered a big social affair and brought large crowds.

Women who rode and competed in the 1920 Fort Bliss Horse Show were: Mrs. Van Dusen, Mrs. C.C. Smith, and  Mrs. W.J. White who were the top place winners in the ladies Open Class. Harriet Horze, Mrs. Burtsram  Orndorff Gay, Frances Smith, and Patty Ainsa were the sponsors of the show. Azina Orndorff Gay, a granddaughter of El Paso Pioneer businesswoman Azina Orndorff, also rode and was considered one of the best horsewoman in El Paso. 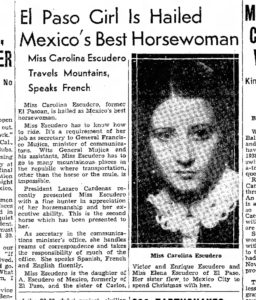 In 1936, a native El Pasoan, Carolina Escudero was named Mexico Best Horsewoman. She was presented with a fine hunter award in appreciation of her horsemanship by Mexican President Lazaro Cardenas. Escudero worked for Mexico’s Minster of Communication dealing with correspondence. She also spoke three languages. Her job involved a lot traveling, in very mountainous regions that you could only get to by horse or mule. ( “El Paso Girl is Hailed Mexico’s Best Horsewoman.”  El Paso Herald Post., Jan 3,1938) 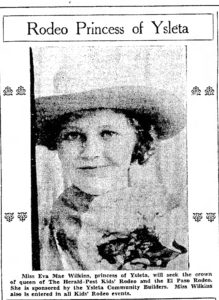 Eva Mae Wilkins was elected Ysleta Rodeo Princess and reigned as princess for The El Paso County Sheriff Posse second annual rodeo in 1940. Wilkins also won girls championships for the El Paso Herald Post Kid’s Rodeo in 1937 surpassing scores made by the boys contestant in the boy championship category. Wilkins also competed in the Southwest Livestock Show entering a sheep in 1936 and a calf in 1937. There were no girls champion named in the 1933 or 1934 Kid’s Rodeo. It was not until 1935 that Jean Issacs, a Las Cruses horsewoman, was named grand champion in the girls division. In 1936, the fist girl from El Paso, Virginia Grooms, was awarded the title. ( Sep 7,1938, El Paso Herald Post, August 4,1953 El Paso Herald Post)

Lorena Bowen was sister of architect E.J. Brandt who worked with Henry Trost. She helped draw up plans and designed for her own roadside inn, called “El Patio,” which was also a place for horse events. Bowen was associated with her husband, W.H. Bowen in his construction company. Lorena Bowen and her husband owned and ran a horse breeding farm and competed in various equestrian contests and events. In 1917 El Paso newspapers reported she shot a big wildcat at her farm. Bowen was also active in the Ysleta’s Lower Valley Women Club and was one of the founders. One of Bowen’s thoroughbreds named “Oakville Peavine” won in two categories in the Fort Worth Horse show. Bowen was active in horse riding organizations in El Paso.

During the great depression Mary Chrystyne Bower was in danger of losing her ranch but then she got a call from Radford School for Girls asking her to teach their students how to ride a horse. Bower established the Bower Riding school. The ranch is now known as Poki Roni, on North Loop and Yarbrough, and the tradition was continued for many years by her daughters. One of her daughters, Patricia Kirchner, continued the riding school

Mary Chrystyne Hoxie was born on a farm in Williamson County, Texas. Her father, Mortimer’s uncle, John Hoxie a railroad magnate from Chicago, purchased 9,000 acres of ranch land in Williamson and built a house which was called “Hoxie House.” He also founded a settlement nearby which was named Hoxie. Since John was living in Chicago, Mortimer helped developed the ranches, imported new breeds of horses, and experimented with irrigation techniques. He served as mayor of nearby Taylor, Texas. The estate was broken up in 1910. Hoxie House burned down in 1934. The Hoxie community started to decline because of drought. These hardships caused the Hoxie family to leave the area. In Electra, Texas Mary’s mother, Mary Anna Mitchell, made a comeback and founded a store there. Mary Chrystyne came to El Paso, probably in 1914, and decided to stay. She lived with her sister on North Oregon street. Her family soon followed her and they established their own residence called “Hoxie Villa” which was somewhere in the Lower Valley. She married James Frazier in 1919 who died of pneumonia in an Army training camp in Kentucky. Mary came back to El Paso and found herself working at a gas station in Ysleta and then married Frank Bower who ran his own grocery store. Bower Road, near Poki Roni, was named in his honor. The Bowers had two daughters, June and Patricia.  Patricia and June Became fine ridding instructors and riders themselves. Mr. Bower was also Deputy El Paso County Tax Collector for many years. Over the years the horse riding school expanded and included students from allover the country. Mrs. Bower is also remembered for her activism, making sure all animals were treated humanely. She served on the Board of the local Humane Society for many years. Bower also founded a youth patrol that went out in the desert and rescued animals. Mrs. Bower did an oral history for UTEP and died in 1973. In 1974 a memorial fund was set up in her honor. Bower was also a founding member of the Ysleta Woman’s Club in 1921.

Since 1954 the El Paso County Historical Society has been a driving force in the historic scene of El Paso. EPCHS strives to foster research into the history of the El Paso area; acquire and make available to the public historic materials; publish and encourage historical writing pertaining to the area; and to develop public consciousness of our rich heritage.
Previous Corinne A. Hartman: Founder of Hartman Flower Shop. Next El Paso Women and Equestrian Sports Part two: 1940s-1970s