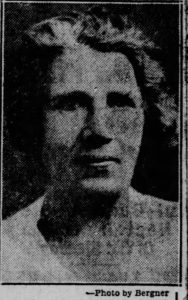 Corinne A. Hartman came to El Paso in 1913 from Albuquerque
Along with her son they opened their own floral shop in 1921.
The Hartman Flower Shop it was in several locations, at one point it in the mills building.

In 1916, Hartman bought land from Frank Tobin at 205 Tobin Place. Hartman established a ranch and gardens. On August 26, 1921,The El Paso Herald reported that Hartman was organizing a  horse breeding farm for race horses. Hartman distributing Kentucky strain of saddle horses from her home at Tobin. In 1923,three of her horses was stolen, witnesses claimed to have seen then crossing in Mexico.

Since 1954 the El Paso County Historical Society has been a driving force in the historic scene of El Paso. EPCHS strives to foster research into the history of the El Paso area; acquire and make available to the public historic materials; publish and encourage historical writing pertaining to the area; and to develop public consciousness of our rich heritage.
Previous Mystery solved: Lolita around the corner Next El Paso Women and Equestrian Sports Part One : 1914 to 1930s