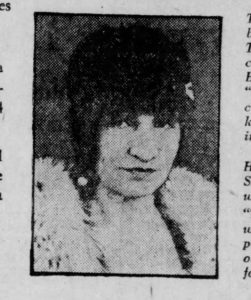 auty School. Capeheart bought the American Beauty Parlor that located in the Banner-Robert Building. by 1947, Capeheart was at Jennie Beauty Shop.

Other early female beauty professionals was Grace A. Benso,who was a beauty and skin specialist  from Chicago was stationed in the Herald Building.There was also  the Allen Sisters Salon ran by Gertrude Cook by the 1920s. There was also Elite Fashions ran by Rose Fairbanks. Esther Rodriquez ran a beauty parlor on  the basement of the Roberts Banner building by 1916. Perhaps the first woman beauty salon operator was Elieen Berg who opened her shop in 1901,being in operation for more then 12 years.

Posener Beauty salons opened in 1908 and then opened in 1911 in the Posner Building and Max Posener was the operator. The Posener was renamed La Mode. There was also beauty shops located at the Popular and White House Department.

Since 1954 the El Paso County Historical Society has been a driving force in the historic scene of El Paso. EPCHS strives to foster research into the history of the El Paso area; acquire and make available to the public historic materials; publish and encourage historical writing pertaining to the area; and to develop public consciousness of our rich heritage.
Previous A Tribute to Frank W. Gorman, Jr. Next Short History on Nurseries in El Paso