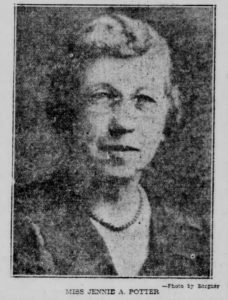 Jeanie Potter and her brother H.L., opened the first floral shop in El Paso in 1906. This first floral shop was also a grocery store. It was located in Hotel Husseman and H.L. built two green houses on Kansas street. Their first greenhous was in Val Verde. H.L Potter was the president of the Potter Floral Company but it was Jeanie who first started raising flowers with her mother. H.L. studied to be a mining engineer but health problems prevented him from going into that career. They were also the first to ship orchids from El Paso. H.L made the bouquet of Orchids  that was placed in a hotel room that President William McKinney stayed, it served as a remembrance for the President, who had been assassinated.  The Floral Shop, had bulbs that were  shipped directly from the Netherlands. 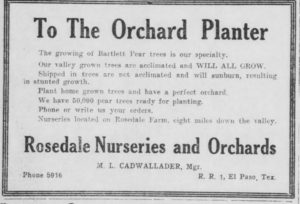 Mark Lancaster Cadwallder, opened the  Rosedale Nursery and Orchards in the Lower Valley as early as 1917. He started growing Arizona Ash, Carolina Poplar Trees, and Bartlett Pears. Cadwallader was born In Kaola, Kansas. He  came to El Paso in 1888. Cadwallader owned more then 300 acres of  farm land in Ysleta. He was also in the cattle business with A.S. Stewart and had holdings in cattle and sheep farms in New Mexico. He was involved in the Rio Grande Irrigation Project and was instrumental in the construction of Elephant Butte Dam. He also helped organized the Lower Valley Congregational Church and the Community Center in Rosedale. He was voted “Master Farmer” and introduced Palm seeds in El Paso. Cadwallader School was named in his honor in 1923. He also had family in Mountain Hills, New Mexico. He was a member of the Bartlett Pears Association, growing and shipping Bartlett Pears. He owned land  in the  North Loop area. He donated land for the Ysleta FFA Farm on Alameda. Cadwallader was president of the Ysleta School Board and ran for El Paso County Commissioner.

In 1947, Charles L. Black  founded Black’s Nursery. It started off as a one man backyard operation. Black’s Nursery, specialized in landscape planning,

trees, and gardening. In the beginning, Black only had one Army surplus tuck. Black cleared mesquite trees on the 4500 block of Montana. Black was born in East Texas and started selling trees in high school. He received his degree in horticulture. He moved his business to 8423 North Loop in the Lower Valley in 1949. Black operated for two years without an office until 1963 when a red barn building was built to house the nursery. It was designed and built by Louis Mollinary. Black’s landscaping projects included jobs in the Dallas-Fort Worth Area, Abilene, Holloman Air Force Base, Las Cruces, and thousands of homes in El Paso. He was joined in the business by his children, Vicki and Charles Jr. They owned 16 acres, owned a farm in Mesilla and had a small store at Ciello Vista Shopping Center. Black served as president of the Texas Association of Nurseryman and was active in the El Paso Rose Shows. Black Nursery was sold to Steve Zimmerly in 2000, who renamed it East Side Discount Nursery and it is still operation to this day.

A Chrysanthemums Nursery Farm was established in 1951, on a 135 acre irrigated farm by Francis and Catherine Warnock. The farm was also part of a project of the Rio Grande Project of the U.S. Bureau of Reclamation. The firm motto was “The Best in the Southwest.” Mr. Warnock got interested in horticulture while in high school and specialized in growing sweet peas. Warnock’s business prospered because Mums became in great demand during schools homecoming season. The Warnock’s shipped flowers to places around the country and earned a national reputation. The Warnock’s used a rooted division method for planting, which was not commonly used by other nursery at the time. The flowers were housed in three hot houses and were irrigated once a week during the summer. The Warnock’s also grew alfalfa, cotton, and other flowers. A Cloth covering was used to protect the flowers. To battle the grasshoppers they used turkeys. They also employed bracero workers and with the U.S. Bureau Bracero Program and housed bracero workers in eight apartments houses.

Cross Nursery was founded in 1938 by Virginia Cross Mays. Mays bought land in the Upper Valley and planted a evergreen trees. She started off as a small backyard operation, with only one trailer and one helper, but soon started to grow. Mays was also well known for her skills as a landscaper, doing work for some prominent people in El Paso and New Mexico. In the 1940’s, her father, R.R. “Rube” Cross took over the business and with his leadership it expanded and grew into a larger operation. Some major landscaping projects included a copper plant in New Mexico, Van Horn Park, and 45 acres of grass and 15,00 worth of shrubs, and eight trees planing at Providence Hospital. He was joined in the business by Virginia’s Husband, Tom Mays, in 1947. Mays came to El Paso in 1942 as a sales manager for American Airlines, they had one daughter named Luann Mattox. In 1953, Mr. Cross opened an additional nursery called Green Thumb Nursery on Airway and later opened a location in the Northeast. Years earlier, in 1929, Mr. Cross had opened a nursery in South El Paso. Tom Mays eventually took over the business with his wife. In 1958, Mr. Mays was appointed to El Paso County Commissioner’s Court  and acted as County Judge. Mr. Mays was reelected in 1962 and died in office in 1966. After his death, the business was sold to Jay Dawson, who renamed it Jay Dawson’s Cross Nursery. 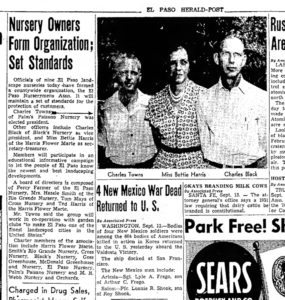 In 1951, The El Paso Nurseryman Association was formed. Charles Towns of Paisano Palms Nursery, was elected President; Charles L. Black of Black Nursery was vice president; and  Bette Harris of Harris Flower Marte, as secretary-treasurer. The association’s first board of directors included Hazel Smith of Rio Grande Nursery; and Tom, and Ted Smith of Harris Flower Marte. Other members included, McDonald Nursery, M.H. Webb’s Nursery in Socorro, Carter’s Garden in East Ysleta, O.H. Palm Seed Co. and W.D. Gross Nursery in the Lower Valley. Gross Greenhouses which was in Ysleta and was operated by farmer, W.D. Gross, dated back to 1921, and was known for its geraniums. He was also a pioneer pea farmer. In the case of the McDonald’s Nursery, Glen McDonald and his wife started their nursery by growing Poinsettias in the 1950’s. The McDonald Nursery was on North Loop. M.H. Webb of Socorro had 40,000 Chinese Elms Trees, Mountain flowers, Arizona Ash, and willow trees. There was also the Belcher Nursery on Concepcion Street near Del Camino Cafe, it started on Alameda a street.

Since 1954 the El Paso County Historical Society has been a driving force in the historic scene of El Paso. EPCHS strives to foster research into the history of the El Paso area; acquire and make available to the public historic materials; publish and encourage historical writing pertaining to the area; and to develop public consciousness of our rich heritage.
Previous Emma Capeheart: Pioneer El Paso Beauty Professional Next Warner Drug Company