The First Lady of the Whitehouse Department Store : Deane Miller 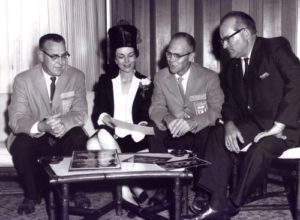 Deane Miller and her husband, Richard, founded the Velvet Door’s Beauty Salon and Cosmetics Distributors in 1968. Miller served as president and had two locations one on the Westside and later opened a new location at, 2041 Trawood street in East El Paso, in the 1973. The first location was on Thunderbird street in West El Paso. The company also released a line of new cream called ” Velvet Mystique Revitalizing Cream” in may of 1968. The cream was a french formula originally created only for salon use. Miller promoted the use of turtle creams not just for woman, but for men. Miller was  supervisor of the White House Department Store Beauty and Facial Department. Richard Miller was President of the White House Department Store.

Miller was heavy involved in the Intentional Art Museum and worked to preserve the Old Turney Home, where the Museum is housed. The Home was built from 1908 to 1910 at 1211 Montana Street by W.W. Turney and his wife, Iva. W.W. Turney was a prominent attorney and state legislator. Miller started her involvement in the museum when it was  at the El Paso Museum of Art and when it became the Intentional Art Museum, she served on that board of directors as well and served as president of the board, who worked in showcasing local artist works and organizing exhibitions. Miller also have donated a lot of her personal collection to the Intentional Art Museum. A parlor at the museum was named in her honor. Miller is a big supporter of the arts in El Paso.

Miller also served as president of the El Paso City Airport and acted as interim manger of El Paso Airport. Miller ran for city council in 1985.

Since 1954 the El Paso County Historical Society has been a driving force in the historic scene of El Paso. EPCHS strives to foster research into the history of the El Paso area; acquire and make available to the public historic materials; publish and encourage historical writing pertaining to the area; and to develop public consciousness of our rich heritage.
Previous Warner Drug Company Next El Paso County Historical Society Statement on Union Plaza Neighborhood