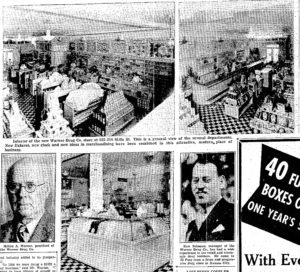 Warner Pharmacy was founded in 1913 by Milton A. Warner who came to El Paso after running a general store in Parral, Mexico. Warner left Parral because of the Mexican Revolution. Warner was born in Warsaw, Indiana and came to  Silver City, N.M. to work as a printer. Warner then took a job in the printing department  for the El Paso Times. Warner got his first printing job at age ten in Colorado. Warner took a job as a newsboy on trains running from El Paso to Mexico. Warner was sent to Parral, Chihuahua in 1900 to open a news shop for the Sonora New Co. He then went into business with Dr. R.D. Robinson and opened a pharmacy and store in Parral. After Robinson death, Warner married his widow, Jennie, who had two children from the previous marriage with Robinson.

Warner’s first store was opened at 212 Mills street. A fire damage the store in 1935 but the store was rebuilt. It was a pharmacy but also included a soda fountain, watch repair services, and sold cigars. Warner died in El Paso in 1940. His store was taken over by his wife, Jennie. After her death Warner left the company stock to her employees. Warner Pharmacy continued with leadership of Clara Aguirre and her brother. They opened a Warner pharmacy at Tigua Shopping Center in 1955. Warner Pharmacy was closed after 1963.

Jennie Westfall Warner was born in Shelby County, Indiana. She was a teacher for 12 years. Warner served as president of the El Paso Women’s Club, and served on the board of the El Paso YWCA. Warner was elected to the El Paso School board in 1923, serving as board secretary and chaired the district’s Finance Board until her retirement in 1933. Warner was elected to the El Paso School Board on an anti-Ku Klux Klan ticket in 1923 and was vocal about her opposition to the Klan. Warner also headed the Women’s Auxiliary at the  first Presbyterian Church. Warner also headed a charity drive for the community chest.

Since 1954 the El Paso County Historical Society has been a driving force in the historic scene of El Paso. EPCHS strives to foster research into the history of the El Paso area; acquire and make available to the public historic materials; publish and encourage historical writing pertaining to the area; and to develop public consciousness of our rich heritage.
Previous Short History on Nurseries in El Paso Next The First Lady of the White House Department Store: Deane Miller