The home at 1201 Cincinnati Ave., known as the “stone castle,” has stood at the location for more than 100 years, providing a spacious and unique home to many families over the decades. 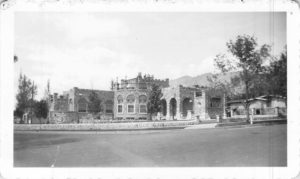 The home at 1201 Cincinnati Ave., known as the “stone castle,” viewed from across the street at Madeline Park on Sept. 1, 1950.
At the time this photo was taken, the home was occupied by Herbert P. Kopf and Bula Kopf, who was pastor of the Open Door Spiritual Christian Church. But the Kopfs only lived in the house for a couple years.

Following is a description of the home by Harriot Howze Jones, writing in the El Paso County Historical Society newsletter, Password:

“The construction is of gray field stone, cunningly fitted together with mortar. The roof is flat, crowned with battlements. The center of the façade is rounded, with bay windows, and extending from either side is a wing. The front door is in the right wing as you approach the house, through an arcade. The house seems to face on Park Road, but the entrance is on Cincinnati Street.”

Jones also cites the “unusual design of the ground floor:” 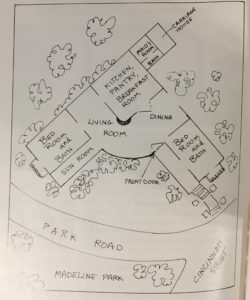 Floorplan of the house

The home was built in 1915 and occupied for its first two years by Mr. and Mrs. Thomas C. Van Epps. Thomas was a division accountant for the Galveston, Harrisburg and San Antonio Railway.

Jones says it was Mrs. Van Epps’ influence that led to the castle-like design of the home.

“It is no accident that the house bears some resemblance to a castle. Mrs. Nettie Van Epps, an architect and contractor, designed and built it … inspired by castles she had seen in Europe, thus the stone walls, tower and battlements. (All it lacks is a moat!)”

Jones reports that Mrs. Van Epps lived in the first floor while the rest of the house was being built. 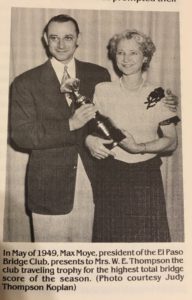 Max Moye, early owner of the home, in later years.

In 1917, the stone castle was sold to Mr. and Mrs. Max Moye. Mr. Moye was the president of Boretz Mercantile Company and vice president of the Myers Company, Calderon Brothers and Zork-Smith Grocers and a partner in the hardware firm of Zork, Moye and Krakauer. In 1919 and 1920, Edward Moye, president of Union Bank and Trust, was listed as the home’s owner, and Max Moye appeared again as its resident again in 1921.

The following year began a long period of ownership by the Luckett family when the Moyes decided they would prefer to live within walking distance of the temple, and the two families swapped homes. The Lucketts had lived on Hawthorne.

Paul H. Luckett, owner of Juarez Mercantile Company, and his wife, Virginia, took residence in the unique home. The prominent family, whose doings were frequently featured in the social pages of the newspapers, lived together in the house for many years until Paul’s death in 1932.

After 1934, the Luckett family and the castle house went on a brief hiatus, with internist Dr. Nathan Keller and his wife, Dorothy, living there for three years before Virginia returned in 1938. She lived there until 1940, when her son, Paul Jr. and his wife, Maxine, took up residence in the home for the next eight years. Paul Jr. owned and managed the Cottonseed Oil Company in Juarez. Virginia lived at several other residences in central El Paso while continuing the family association with Juarez Mercantile Company and becoming president of real estate firm Sanders, Wisbrun and Luckett in the mid-1940s. 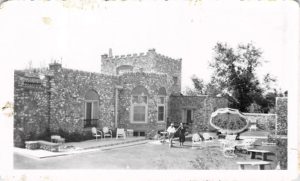 Backyard of the castle house, likely with then-residents Herbert and Bula Kopf.

The Kopfs were listed as living in the home in the 1950-51 city directory before a new family moved in for an extended period.

Simon R. and Esther Z. Silva, owners of Sylvia’s women’s clothing store and Mexico Hardware Company, both at 110-114 W. Overland, moved into the iconic home in 1953. In addition to running their businesses, the Silvas were active with the Mexican Red Cross, and Mrs. Silva hosted many parties at 1201 Cincinnati for young brides-to-be and, in 1958, a surprise birthday party for El Paso mayor Raymond Telles.

Jones wrote that Mrs. Silva was also responsible for extensive modernization of the home during her family’s time there. 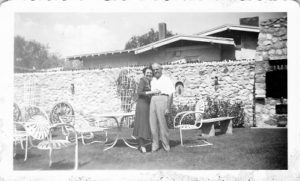 The Kopfs in the yard of the home at 1201 Cincinnati.

Mr. Silva had a couple scrapes with the law during his career. In 1919, he was accused of swindling $10 from a transient Mexican in a pawn shop. The charge against him was later dismissed. In 1963, he paid a $10,000 fine after pleading guilty to smuggling guns into Mexico.

Simon Silva passed away in September 1967, and Esther moved out of the castle house in 1971.

Richard Coleman lived in the house for a short period, and it was purchased in 1972 by Mr. and Mrs. Frank Brown. Mr. Brown was an administrator with the Ysleta Independent School District. After Brown’s children grew up and moved out, the home was too large for just Mr. and Mrs. Brown, and they sold it to Dr. and Mrs. Jose Roman in 1977, who had enough children to fill its extensive space: six of them. 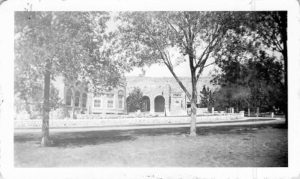 I can’t summarize the life of this iconic home any better than Ms. Jones did, so I’ll finish by quoting her one last time:

“So many young people have been reared in this spacious house, and there must have been gay dances and other festivities galore. One may think of a castle as being a kind of fortress, rather dark and cold, but this El Paso ‘castle’ is flowed with sunshine, has beauty and a warm and happy atmosphere.”

Since 1954 the El Paso County Historical Society has been a driving force in the historic scene of El Paso. EPCHS strives to foster research into the history of the El Paso area; acquire and make available to the public historic materials; publish and encourage historical writing pertaining to the area; and to develop public consciousness of our rich heritage.
Previous Fannie Schutz Spitz: Inventor of the first Machine to Shell Pine Nuts for Commercial Use was born in El Paso. Next  Helen Farrington Kister: First Curator of the El Paso County Historical Society.