Fannie Schutz Spitz: Inventor of the first Machine to Shell Pine Nuts for Commercial Use was born in El Paso. 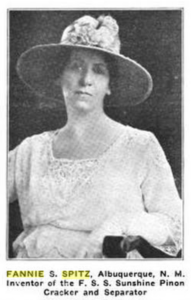 Fannie S. Spitz was an inventor who patented the first machine to shell pine nuts for commercial used. Fannie Schutz was born in El Paso and was the daughter of Samuel Schutz and Friederike Siebenborn in 1873. Fannie’s cousin, Solomon C. Schutz was a prominent merchant and went on to serve as mayor of El Paso. Fannie traveled and studied nut processing methods and worked as an apprentice in a machine shop to come up with a practical machine to shell pine nuts in bulk. Spitz was granted a patent for the “Method and Apparatus for Shelling Nuts” in 1918. Fannie built   the prototype in her basement. Fannie sold pine nuts out of her farm in Albuquerque. Fannie showed off the machine to a national convention of manufacturers in Chicago in 1922. Fannie also experimented with coffee beans using her machine.

Fannie married Berthold Spitz, who was born in Bohemia in 1893. The couple help founded the Congregation Albert, a synagogue in Albuquerque. Fannie died in Pasadena, California in 1943. Fannie announced her retirement in 1923 and was seeking buyers to take over her business.Fannie was considered an expert on pines nuts and their cultivation.

Since 1954 the El Paso County Historical Society has been a driving force in the historic scene of El Paso. EPCHS strives to foster research into the history of the El Paso area; acquire and make available to the public historic materials; publish and encourage historical writing pertaining to the area; and to develop public consciousness of our rich heritage.
Previous El Paso Athletic Hall of Fame 1955-2018 Next Iconic “castle house” defined by family, atmosphere