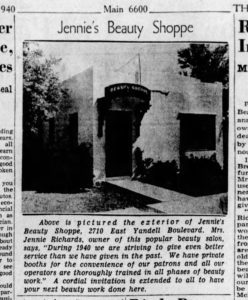 Jennie Calderella was born in El Paso in 1909. She was the daughter of Jack Calderella and Angela Barbaria. In 1898, Jack founded a meat market, and it eventually became a grocery store. Jack’s son, Ciro, took it over and ran it as a restaurant equipment store. Jack came to El Paso from Sicily and opened a grocery store on Myrtle Street. Jack and Angela raised a family on five. Jennie attended St Mary’s Catholic School, and she trained as a hairdresser at the White House Department Store. In 1925, she opened her beauty shop in the front room of her home at Magoffin street. In 1926, Jennie opened “Jennie’s Beauty Shop” on 2710 East Yandell next to the first Coke Cola Bottling Company in Five Points. She operated the business for 40 years and retired in 1956. Before Jennie opened her shop in Five Points, many of the beauty salons were in Downtown El Paso.

Jennie married Sidney Richards, who was a founder of Richard’s Sheet Metal Company. Richards died in 1976. Jennie devoted her time after Sidney’s death to traveling and playing golf and bridge. Jennie died in 2003. She was the last surviving child of Jack Calderella.

Since 1954 the El Paso County Historical Society has been a driving force in the historic scene of El Paso. EPCHS strives to foster research into the history of the El Paso area; acquire and make available to the public historic materials; publish and encourage historical writing pertaining to the area; and to develop public consciousness of our rich heritage.
Previous Oral History Workshop This Sunday! Next Nell Gardner: Founded the first Pilot Club West of the Mississippi