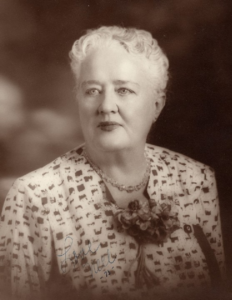 In 1911, Nell Stanley Corbett came to El Paso with first husband and her daughter, Isabella Zimmerman. Nell was soon widowed and had a daughter to support. She worked as a secretary for the President of the El Paso National bank. She worked for the El Paso Flourdry and Machine Company and was the manager of Hotel Husseman. Nell also worked for the Railroads and Zork and Moye Hardware Frim. Nell ran for El Paso County Tax Assessor in 1928, she was the first woman candidate for the position. She was defeated by Frank Scotten.

She remarried to Lawrence Gardner, who headed Empire Bottling Company in 1914. Nell decided to open her business school for young women it was called “Mrs. Lawrence Gardner Commercial College in 1928. Nell closed down the school in 1940 to join Lawrence in Empire Botting and Isabella served as a vice president of the company. After Lawrence death, Nell sold the company. Nell then founded Empire Moving Company until 1957.

Nell founded the first Pilot Club in El Paso. In 1937, she co-founded the Pilot home for elderly. In 1940, she purchased a home on 113 Edison. Gardner was the first president of Pilot international and help organized some chapters in Mexico. Gardner was honored as the First Lady of El Paso in 1960 by the Beta Sigma Phi.

Since 1954 the El Paso County Historical Society has been a driving force in the historic scene of El Paso. EPCHS strives to foster research into the history of the El Paso area; acquire and make available to the public historic materials; publish and encourage historical writing pertaining to the area; and to develop public consciousness of our rich heritage.
Previous Jennie Calderella Richards: A Pioneer in Business Next A Study in Historic Beauty