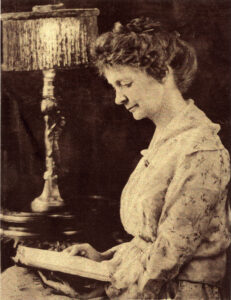 During the early twentieth century, Belle Christie Ferguson Critchett (March 9, 1867 – January 6, 1956) was one of El Paso’s most important suffrage leaders. In addition to her work advocating for the women’s suffrage, Critchett supported many other progressive era-issues of the time, including political reform, maternal health and child welfare, prison reform, prohibition, and the peace movement.

Critchett’s middle-class background – similar to many women involved in club work and the suffrage movement – allowed her time to participate in and lead various women’s organizations in El Paso. Following the death of her only child at eight months old, Otis Adams Critchett, Jr., Critchett concentrated on civic, political, and church work, while her husband “delved deeper into his chemistry studies.” Belle Critchett stated in a 1926 newspaper article that “After the loss of our baby…I found in social service work fulfillment of a need and a joy…there is a greater joy and greater good done in serving the public. I get more out of this service work than I put into it.”[3]

Women’s suffrage and the El Paso Equal Franchise League, El Paso’s first suffrage organization, were deeply important to Critchett. She actively participated in the League and served as president in 1917. The League held its initial meeting on January 12, 1915. Led by writer, artist, and School of Mines (now UTEP) registrar Ruth Monro Augur (1886-1967), the group met in the parlors of the Hotel Orndorff. According to the minutes from the first meeting, the League was formed for the “purpose of organizing an association to work to create a favorable sentiment for women’s suffrage.” One attendee, Mrs. De Groff, “talked in favor of the movement saying the city was ready for such a League and would receive it in the right spirit.”[4] Along with advocating for women’s suffrage, the League hosted talks by women about health, hygiene, and childcare, and debated topics, such as city billboards.[5]

In May 1917, Critchett traveled to Waco, Texas as the League’s delegate to the state convention. The El Paso Herald reported that Critchett was selected due to her status as the “one who most thoroughly understood the local situation and conditions.”[6] Through her activist work, she corresponded regularly with many local and state political figures, such as R.E. Thomason, R.M. Dudley, and Morris Shepherd, to support women’s rights, legislation regarding married women’s property rights, the formation of a U.S. Department of Education, and other reform issues. As League president, Critchett “helped promote the Better Babies campaigns, community singing and food conservation campaigns, and soldiers’ entertainment.” She also served on the state board of the Texas Equal Suffrage Association.[7]

The El Paso Equal Franchise League experienced controversy in June 1918 when it endorsed Zach Lamar Cobb for congress. The president, Mrs. L.T. Kibler, resigned after the League, in her words, “ceased to be an equal franchise league with equal rights for all citizens, and is wholly a political organization…”[8] After Kibler’s resignation, Critchett again served as president.

In December 21, 1918, El Paso Herald, Critchett argued against state-by-state suffrage amendments as they were too slow and problematic due to stipulations in certain states’ constitutions. Instead, she supported a national amendment for women’s suffrage, which was in line with national women’s suffrage organizations’ platforms. Critchett also discussed how the disenfranchisement of women undermined American democratic ideals. She stated:

How can any man now in the face of all that women have done during the last four years and all that they have done in the past can hesitate for a moment in granting them what they should have had fifty years ago, is a mystery…In order to save our beloved country from criticism by foreign lands and people who do not understand our talk of democracy without its complete fulfillment, women should at once, now and always, have the right to a voice in the affairs of their own government. Americans should understand that he would debar women from suffrage in this country is but a puny replica of the European kings who for centuries used their utmost to prevent man suffrage.[9]

The primarily Anglo El Paso Equal Franchise League, like the Texas Equal Suffrage Association, was segregated. On June 12, 1918, Critchett spoke at a meeting of the Negro Women’s Club of El Paso at Maude Edith Sampson’s home about how to register to vote in the state’s primary elections – now open to women. Later that evening, Sampson, a teacher at Douglass School, helped organize the El Paso Negro Woman’s Civic and Equal Franchise League and became its chair.[10] Members of the El Paso Equal Franchise League suggested that the new group apply for membership with the Texas and national suffrage associations, but the African-American organization was denied membership as a local auxiliary league.[11]

Belle Critchett was also highly interested in education and child welfare. She ran for a position on the El Paso school board as the only female candidate in 1918. Despite support from El Paso Mayor R.M. Dudley, she was not elected.[13] During the 1920s and 1930s, she held various leadership positions: president of the El Paso Home for Girls, publicity chair of the local chapter of the Women’s Christian Temperance Union, member of the El Paso Joint Legislative Council, and corresponding secretary of the First Presbyterian Women’s Auxiliary for eight years.

In a weekly piece on El Paso clubwomen, Critchett described herself as “literary and musical by nature.”[14] As a young woman in Denver, Crichett took special courses in vocal music and drawing. She also studied instrumental music for several years. After moving to El Paso, Critchett trained a children’s chorus in the First Presbyterian Church, where she was a member.

An essayist and poet, Critchett’s poems often appeared in the El Paso Times and other publications throughout the 1930s. In 1934, she wrote an article on the history of the El Paso chapter of the Women’s Christian Temperance Union, as part of a book on the Texas Union’s history.[15] In 1935, the Anthology of Magazine Verse chose Critchett’s poem “Voices” for inclusion in their annual publication. The following year, the Texas Book of Poets included her poem “Co-operation.” Critchett’s papers, housed in the C.L. Sonnichsen Special Collections Department of The University of Texas at El Paso Library, also contain skits from the mid-1920s, possibly by her, about women voting and voting rights.[16]

Since 1954 the El Paso County Historical Society has been a driving force in the historic scene of El Paso. EPCHS strives to foster research into the history of the El Paso area; acquire and make available to the public historic materials; publish and encourage historical writing pertaining to the area; and to develop public consciousness of our rich heritage.
Previous The El Paso Equal Franchise League, 1915-1920. Next Traces of Stardom in El Paso: Bessie Love.