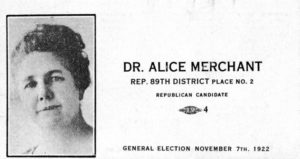 Another founding mother of the El Paso Equal Franchise League was Dr. Alice Merchant, who was the first woman doctor in El Paso. She came to El Paso in 1895. Alice Blackadder was born in Nova Scotia, Canada. She graduated from New York Medical College. Merchant practiced in Ysleta and Dallas before coming to El Paso. Merchant retired from practicing medicine in 1908.[1]

Merchant’s daughter, Geraldine Rand was also a charter member. Merchant was a strong advocate for suffrage and reform, and peace. When asked about the motives of women suffragists by the El Paso Herald, Merchant said “Advocates of woman’s suffrage are not seeking to thrust man out of his place and usurp it themselves. If suffrage is given to women, they could find themselves their time completely occupied in working for better laws for the protection of other women and all children.”[2]

Since 1954 the El Paso County Historical Society has been a driving force in the historic scene of El Paso. EPCHS strives to foster research into the history of the El Paso area; acquire and make available to the public historic materials; publish and encourage historical writing pertaining to the area; and to develop public consciousness of our rich heritage.
Previous Grace Logan: An El Paso Suffragist. by Joseph Longo Next Meeting of Women at Fort Bliss Launched the El Paso Women’s Suffrage Movement By Janine Young