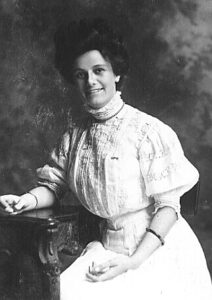 Women in El Paso had been speaking about women’s enfranchisement for years before the creation of the El Paso Equal Franchise League (EPEFL) in early 1915. The moment was right for the formation of an organized suffrage effort in El Paso. The city’s population had reached a critical mass, there was a network of reform-minded women who were active in civic organizations, and the Texas Woman Suffrage Association (TWSA) was working at the state level to create local leagues.

The founder of the EPEFL was Ruth Monro Augur, who was a 28-year-old artist, journalist, educator, and the daughter of an Army officer stationed at Fort Bliss. Augur was born in Austin on November 14, 1886, to Cecilia Hall and Charles Manwaring Augur. In El Paso, Augur worked for the El Paso Herald as the Society and Sports Reporter and then as the Society Page Editor. In 1917, Dean Steve H. Worrell of the Texas School of Mines hired Augur to serve as the school’s new registrar. Augur designed the school’s first logo and seal, played cello at school functions, and in 1919 wrote and directed the first theatrical performance staged by students.1

Augur would go on to become a noted artist of the American West. After the death of her father, she moved to California in 1929 and in 1934 relocated to Oklahoma after winning a WPA commission during the Great Depression to paint a series of six murals at the Garfield County Courthouse in Enid. Augur completed the murals, which depicted the history of the Cherokee Strip Run, in 1937 and remained in Oklahoma for the remainder of her life. There, she was a well-known portrait and commercial artist and today is recognized for her depictions of horse studies, mountain landscapes, Army officers, cowboys, and Native American life with accurate dress and accouterments.2

Augur’s efforts made talk about a suffrage league in El Paso a reality. She served as an important link between women at Fort Bliss and those in El Paso who supported suffrage. The first planning meeting for a suffrage league was held on November 7, 1914, at the home of Ethel W. Cocke at Fort Bliss. At the meeting were Colonel George H. Morgan, three of his five daughters, Mary Morgan Purdon, Dorothy Morgan, and Edith Morgan, as well as Rose McClellan Exton, Grace Russel Lear, Mary Louise McCain, Emily Berry Sherwood, Augur, and Cocke.3

Those in attendance hailed from an impressive group of military families whose careers spanned the military history of the United States from the Indian Wars of the late nineteenth century through World War II. Colonel Morgan (1855-1948) was a veteran of the Indian Wars, Spanish American War, Philippine Insurrection and a recipient of the Indian Wars Congressional Medal of Honor. At the time of the meeting in November 1914, he was commander of the 8th Cavalry at Fort Bliss and would go on to serve in World War I.

His eldest daughter, Mary Morgan Purdon (1883-1962) was the widow of Eric St. Clair Purdon, a British consul in the Philippines. Purdon would build an impressive career for herself after leaving El Paso. She supervised the clerical staff at General John J. Pershing’s AEF Headquarters during the First World War, became the first director of women personnel for the JP Morgan Company in New York, and ended her career as a librarian in the office of the Army Chief of Staff at the Pentagon.

Grace Russel Lear (1885-1970) was married to Captain Benjamin Lear Jr., who would later become a general and serve in both world wars. Emily Berry Sherwood (1891-1968) was the daughter of Brigadier General Lucien Grant Berry and married to First Lieutenant John Wesley Sherwood who would rise to the rank of colonel and also serve in the world wars. Rose McClellan Exton (1889-1984) was married to First Lieutenant Charles Wesley Exton, who would retire as a colonel. Mary Louise McCain (1878-1942) was married to Lieutenant William A. McCain who went on to become a brigadier general. Ethel Cocke (1890-1973), who hosted the meeting, was married to Colonel John Cocke, a veteran of the Spanish-American War, the Philippine Insurrection, and later the First World War. Augur’s father, Charles Manwaring Augur, was a captain in the U.S. Army and a veteran of the Spanish American War.

What is striking about this group of women was their youth. With a median age of 24, they represented the New Woman of the early twentieth century and their lives mirrored many characteristics of young suffragists from El Paso. The New Woman represented both an image and a reality for women in the United States who came of age between 1890 and 1920. This new generation of women asserted a public presence through college education, professional work, and politics. The New Woman was associated with the rise of feminism and women’s suffrage after 1900, and later with the rise of consumerism, mass culture and a freer expression of sexuality in the 1920s. The image emphasized youth, mobility, freedom, modernity, and greater independence.4

The young women attending the meeting at the Cocke house discussed various topics related to women’s status including women’s property rights, protection of minors and prevention of child labor, and the double standard of morality for women, which held them to a higher sexual standard than men. Augur spoke about the work that already had been accomplished by El Paso women including the creation of a rescue home for delinquent girls, which kept them from being sent to the county or city jail, the placing of a police matron and probation officer for women at the county jail and county court, and the establishment of a traveler’s aid station at the union depot for the protection of young girls and women who were passing through the city.5

The El Paso Herald noted that the Army women “deplored militant suffragism” and would follow “safe, conservative methods of winning their goal.” The paper also reported that the general opinion among the women was that through women’s suffrage, better laws that affected women’s welfare could be obtained “without entering or interfering with man’s pet little game of politics.” Mary Purdon said, “It is not that we ourselves may need these laws for our own protection, but it is to benefit those women who do need better protection and who are not in the position to work for altered laws.”6

The Fort Bliss women reached out to El Paso women who supported women’s suffrage to discuss forming a league. Two months later the El Paso Equal Franchise League was created on Tuesday, January 12, 1915 at the Hotel Orndorff in downtown El Paso. Augur presided over the meeting and the delegates declared that the EPEFL was created for “the purpose of organizing an association to work to create a favorable sentiment for women’s suffrage.” Augur, Rose Exton, Dorothy Morgan, and Mary Morgan Purdon represented Fort Bliss at the meeting and were enrolled as charter members.7

The November 2014 meeting at Fort Bliss was the genesis of the suffrage movement in El Paso. The EPEFL became one of the most successful grassroots organizations in El Paso history. During its five years of existence from 1915 to 1920, the league was a dynamic organization with more than 300 members, ongoing advocacy, and connections to state and national suffrage organizations. The EPEFL was fortunate to be led by highly effective women beginning with its founder, Ruth Augur, and including Belle Critchett, Alzina DeGroff, Louise Dietrich, Fannie Fennell, and Grace Logan. By 1918, the EPEFL had secured endorsements from every El Paso male representative including the mayor, city councilmen, county commissioners, county judge, U.S. Senator, U.S. Representatives and the entire state delegation in Austin. When the Nineteenth Amendment was ratified in August 1920, members of the EPEFL reorganized themselves as the El Paso League of Women Voters and continued their work on behalf of women’s rights throughout the 1920s.

Since 1954 the El Paso County Historical Society has been a driving force in the historic scene of El Paso. EPCHS strives to foster research into the history of the El Paso area; acquire and make available to the public historic materials; publish and encourage historical writing pertaining to the area; and to develop public consciousness of our rich heritage.
Previous Alice Merchant: An El Paso Suffragist by Joseph Longo Next The El Paso Woman’s Club and the Woman’s Suffrage Movement By Joseph Longo