October 22, 2020— The El Paso County Historical Society is pleased to name the Sunset Heights Neighborhood Improvement Association as the recipient of the 2020 Chris P. Fox Award.

Mr. Fox, also known as Mr. El Paso, served as El Paso County Sheriff and was well known for his efforts to promote the city both locally and nationally. The annual award named in his honor goes to the person or organization who has gone above and beyond to preserve El Paso’s rich history. The award includes a check in the amount of $976.01, which comes from a dedicated special purpose fund established by Chris P. Fox and which is managed by the El Paso Community Foundation.

The Board of Directors at the El Paso County Historical Society (EPCHS) selected the Sunset Heights Neighborhood Improvement Association (SHNIA) because of their efforts to raise awareness of the Texas Department of Transportation’s “Reimagine I-10” project. In particular, this project would widen the interstate through the downtown corridor, which would entail the destruction of several significant and/or historic properties on Yandell Drive, including the El Paso Holocaust Museum and the Pearl and Jessica apartment complexes. Each of these buildings stand within the Sunset Heights neighborhood, which is both a locally and federally designated Historic Neighborhood. The EPCHS believes SHNIA deserves recognition for their tireless efforts to bring attention to the potential loss of historic properties and the destruction of historic neighborhoods. 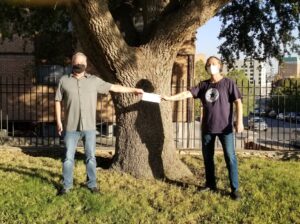 Since 1954 the El Paso County Historical Society has been a driving force in the historic scene of El Paso. EPCHS strives to foster research into the history of the El Paso area; acquire and make available to the public historic materials; publish and encourage historical writing pertaining to the area; and to develop public consciousness of our rich heritage.
Previous Exhibit: Preserving Local History: El Paso County Historical Society 1953-1986. Next Weddings at the Burges House.