by EPCHS in Latest, News & Events, _Frontpage Below the Fold |

By this time many of the early members and early active members had died, retired, or moved. One of these women, A. Louise Dietrich, was serving as president of the state chapter when she retired in 1940. Dietrich along with Ella Tipton worked to keep the league alive, but WWII and related domestic and economic issues strongly dominated women activism among 1940s women’s clubs. Tipton went on to help organize a local nursing council on war service and chaired the committee in 1942 for the Texas Graduates Nurses Association District No 1.

League meetings topics of 1940 included Federal Aid for Education, tariffs, and Jury Service for Women. Tipton and Dietrich were delegates to the 1940 National Convention held in New York. The last meeting of the league was probably on May 26, 1940, with the topic being “Department of Government and Foreign Policies” by Belle Critchett. By 1941 there was no mention of the local league in the newspapers. 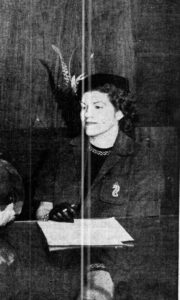 Non-Partisan Women was an organization that filled the void left by the absence of the league. Non-Partisan Women was organized in Nov of 1950, with Margaret Talley as temporary chair. One of the purposes of the organization was to campaign for a city manager form of government. The organization also planned to support competent women for local offices, get out the vote, and hold poll tax drives. In 1951, the group started their campaign to get other women organizations to support a city manager form of government and to have it written in the city charter that was going to be redrafted in 1952.

They were joined by  Altrusa, American Association of University Women, Jaycees Wives, Junior Women’s Club, Lulac Ladies Council No.9, Pan American Roundtable, Women Auxiliaries of the El Paso Medical and Dental Societies,  Woman’s  Department of the El Paso Chamber of Commerce, Pan American Opti-Mrs, and the  El Paso Pilot Club. Also in 1951, the group started a campaign to bring awareness of the poor conditions in the city tenements. The group worked with the City Sanitation Board in their campaign to closed tenements that were in terrible condition and considered not suitable for human habitation. Non-Partisan Women conducted a questionnaire of 150 tenement residents to help the City Sanitation Board with their campaign. Carmelita Pomeroy, Mrs. J.J. Roybal, and Mrs. F.E. Maldonado were appointed to coordinate the Slum Clearance Campaign efforts. They were to work with tenement residents to keep up the improvements 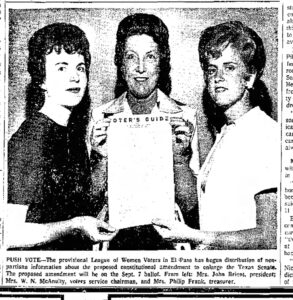 In 1965, the State League of Women’s Voters reorganized the El Paso chapter with Margaret Brient as president of the provisional chapter. The local league organized and ran a voter’s education campaign. In 1966, they opened the “Project Vote” Campaign for the Nov. 8, 1966 election, and opened a campaign for registration of voters for the 1967 elections. They put up billboards with “Get Out the Vote.” They also passed out, posted, and delivered flyers door to door.

They started collecting data for a booklet titled “Know Your County.” The group attended local government meetings and developed relationships with government officials. They received support from the County Judge and in Feb. of 1966, Mayor Judson Williams declared a “League of Women Voters Week.” They also published voter guides and studied different issues like urban renewal. They hosted the state convention in El Paso in 1967.

Since 1954 the El Paso County Historical Society has been a driving force in the historic scene of El Paso. EPCHS strives to foster research into the history of the El Paso area; acquire and make available to the public historic materials; publish and encourage historical writing pertaining to the area; and to develop public consciousness of our rich heritage.
Previous Snow falls in El Paso. Here’s a look at the Burges House during Valentine’s Day Next Bonnie Lesley and The Founding of the El Paso Women’s Political Caucus.