Bonnie Lesley and The Founding of the El Paso Women’s Political Caucus. 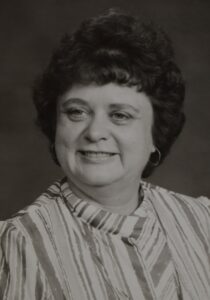 In August 1970, Bessie Simpson, the Women’s Page editor at the El Paso Herald-Post, authored an article subtitled “To Lib or Not to Lib” in which she interviewed El Paso women, young and old. Of the twelve El Paso women quoted, the majority endorsed very traditional female roles. According to her findings, most of these women rejected the idea of equal rights with men. Local attorney Mary Vance Gwinn said full equality would require full responsibility including military service.  One of the very few female physicians said, “I believe you get along better with men if you act like a female.”  Only Sandy Casillas, the mother of five, revealed in the article that she had actually read Betty Friedan’s The Feminine Mystique, a book released in 1963. Friedan’s book is credited with helping spark the second wave of feminism in the United States.  The article suggested that El Paso’s women were not at the forefront of the women’s movement.

Nonetheless, there was significant interest in feminist ideas among El Paso citizens, as can be seen from the fact that within March 1972 the renowned author Gloria Steinem spoke to an overflow audience at Magoffin Auditorium on the campus of the University of Texas at El Paso (UTEP). Additionally, on May 25, 1972, Marti Allen, an El Paso Herald-Post writer, wrote a long piece inviting local “women libbers” to outline their goals. By 1971, the first feminist organization was formed in El Paso at UTEP. The UTEP’S Women Liberation Group wrote letters and articles for the Prospector, the student newspaper. They also spoke on different issues and held consensus-raising sessions.  They helped coordinate the visit of Steinem to the university.

There were other signs of activism as well.  Chicana feminist Martha P. Cotera, a graduate of El Paso High School, was running for office elsewhere. The mostly female workers at El Paso’s Farah Manufacturing had initiated a bitter strike for better working conditions.

Responding to these prevailing conditions—locally and nationally—EPWPC began with a meeting initiated by educator Bonnie Lesley on September 12, 1973, of twelve women at the home of local attorney Ruth Kern. The group was pro-choice and supported the implementation of the Equal Rights Amendment (ERA) passed in 1972 by the U. S. Senate.  Indeed, Texas was one of 22 states that had ratified the ERA by the end of 1972.

An EPWPC newsletter from the 1980s stated that the purpose of the caucus was “to organize El Paso County residents, especially women, of all races, creeds, and cultural backgrounds in order that they may unite in political action—especially against sexism, racism, institutional violence, and poverty.”

According to the organization’s 1983 Woman’s Equality Day program, which suggested the title of this article, some of the earliest members included Bonnie Lesley, Ona Porter, Ruth Kern, Janet Reusch, Alicia Ramirez, Rose Ornelas, Connie Ambrose, Irene Hadley, Georgia Russell and Eva Stewart. By 1975, EPWPC membership had grown significantly. The group met in the law offices of Malcolm McGregor on Mesa St. across from St. Patrick’s Cathedral. Other hard-working members who attended meetings there included Kitty Schild, Chris Kelso, Dennece Knight, Jesse Carrasco, Phyllis Armijo, Lois Marchino, Anne Holder, Eva Ross, and Stella Juarequi.  Judy Zarate, Polly Harris, and Susan H. Hatch were leaders in the 1980s.El Paso’s first and only female mayor to date, Suzanne “Suzie” Azar stated, “[EPWPC] really put the glue to women in El Paso. It got me and others into politics as precinct chairs and working on campaigns.”

Beginning in 1974 EPWPC held an annual Women’s Equality Day (WED) fundraising banquet in late August to commemorate the anniversary of the 19th amendment to the national constitution giving women the right to vote. This event was strategically timed to mobilize members and voters for key elections coming in the fall. Programs from WED are a rich source of information on the activities of El Paso women from many spheres of life.  At EPWPC meetings, members found themselves in the company of dynamic women from the entire city with a variety of backgrounds and political perspectives.

Combined with the Caucus’ organizational power and fundraising, this broad network contributed to the electoral success of local women candidates. The first of these was Arlene Quenon, who in 1975 was elected as a city representative. Quenon was part of the Bicentennial Council in 1976 under Mayor Don Henderson.

Lesley went on to work as a public school administrator in many settings across the nation to reform teaching and learning.  In 2018 Lesley described her ongoing activism as a retired Texas educator on the website, Rebels at Work. Though “hardly a radical organization [the Caucus] turned me into a political junkie,” wrote Lesley.  “Since then,” she continued, “ I spend time every day fighting the good fight.” Lesley passed away last year.

Read more about the caucus here

Since 1954 the El Paso County Historical Society has been a driving force in the historic scene of El Paso. EPCHS strives to foster research into the history of the El Paso area; acquire and make available to the public historic materials; publish and encourage historical writing pertaining to the area; and to develop public consciousness of our rich heritage.
Previous The History of the El Paso League of Women Voters: 1940-1967 Next HISTORICAL SOCIETY OFFERS LOST RESTAURANTS BOOK