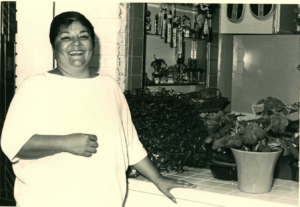 Judy Zarate, a member of the Laguna Pueblo, served in local and national roles in the Women’s Political Caucus, becoming a leader of the caucus in the 1980s. This mother of three and member of Leadership Texas was twice local chair of EPWPC and served on the board for nine years. In 1986, Zarate served as First Vice President of the National Women’s Political Caucus. That same year, El Paso Women’s Political Caucus honored her as Feminist of the Year. A recipient of the Barbara Cole Award—named after a highly respected member Barbara Cole who died too young —Zarate was directly responsible for bringing the 1986 Texas Women’s Political Caucus biannual convention to the city. Polly Harris pushed Zarate to pursue political leadership roles, according to a 1987 article in the El Paso Times. When Zarate died April 13, 1998.,El Paso Times journalist Jim Conley quoted former El Paso mayor Suzanne “Suzie” Azar. “She worked intensely for women’s equality issues,” Azar said of Zarate. “She was always there.”

Since 1954 the El Paso County Historical Society has been a driving force in the historic scene of El Paso. EPCHS strives to foster research into the history of the El Paso area; acquire and make available to the public historic materials; publish and encourage historical writing pertaining to the area; and to develop public consciousness of our rich heritage.
Previous Anne Holder Fought for Women Rights. Next Lucinda de Leftwich Templin