From “Radford School: The First 75 Years of Excellence” by Laura Cramer, The Password 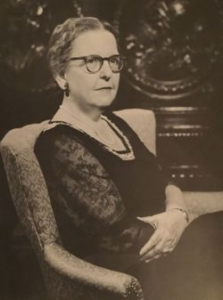 On January 15, 1910, a group of El Paso businessmen met at the Chamber of Commerce. Their purpose in the meeting: to discuss the possibility of establishing a private boarding school for girls. Other meetings followed in rapid succession. And by September of that same year, El Paso School for Girls was ready to open with 18 students and a carefully chosen by faculty headed by Ora Slater and Olga Tafel as associate principals.

In August 1927, a new principal, Dr. Lucienda de Leftwich Templin, former Dean of Girls at Lindenwood College in St. Charles, Missouri, was named. This appointment marked the beginning of a new ear for the El Paso School for Girls. Dr. Templin found a school deeply in debt and in danger of closing, but she had not taken the job to preside at a funeral. Soon after she became principal, she aroused in her longtime friends, Mr. and Mrs. George A. Radford of Webster Groves, Missouri, an active interest in the school and its welfare. The Radfords recognized the school’s potential under the leadership of their friend, and they decided to pay off the mortgage and to incorporate the school. In May 1931, following a long period of careful planning, Mr. and Mrs. Radford became owners of the school, and the name was changed to Radford School for Girls. In the years that followed, they continued to spend large sums to modernize it.

Under Dr. Templin the school steadily expanded its programs reputation, and physical plant. Julia Brown Hall, named for Mrs. Radford, was dedicated in 1937 and is still used to house offices, the library, and classrooms. In 1956, Nelle Brown Kellar Hall, the new dormitory and dining room were built. Today, as then, lunch is served to students and faculty on linen tablecloths with linen napkins, and—as Dr. Templin requested at that time—the “members of the faculty correct the students’ table manners and their conduct generally.

With the building of Templin Hall and Auditorium in 1959, the Upper School facilities were greatly enlarged and improved, and the addition of Fulwiler Hall in 1969 added a gymnasium and several classrooms.

Dr. Templin served as principal of the school until her death in 1969. Her personality continues to exert its influence to this day, and there are numerous anecdotes and legends concerning her. Her spirit is said to be with Radford still, and the many traditions established while she was principal are a very large part of what makes Radford unique. In her own words:

The idea of training which requires real effort and recognizes values in accomplishment and personal discipline is not popular. The desire for easy credits and snap courses eclipses the value of the subject matter itself. This is poor training. Character, self-discipline, and mastery do not grow from such soil. Soft teaching and easy studies do not produce moral fiber or mental stamina. Successful living does not come by following the path of least resistance and avoiding every task that seems hard and unpleasant.

Since 1954 the El Paso County Historical Society has been a driving force in the historic scene of El Paso. EPCHS strives to foster research into the history of the El Paso area; acquire and make available to the public historic materials; publish and encourage historical writing pertaining to the area; and to develop public consciousness of our rich heritage.
Previous Judy Zarate: She was always there. Next COVID-19 update: El Paso County Historical Society open by appointment only