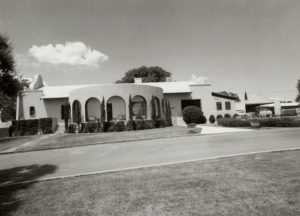 The Tullius M. Wingo House at 4115 Trowbridge was designed by Henry Trost in 1907. When it was built, the home stood alone among the sand dunes with no neighbors close by.

According to an article in the Aug. 14, 1935, edition of the El Paso Herald, the home’s interior design was commissioned from Chicago firm Mitchell and Halbach and included leaded, stained glass casement windows in the living room and dining room windows featuring purple grapes and green leaves. The windows were made and installed by the same man (unnamed) who created the dome in the Paso del Norte Hotel, according to the article.

Mr. Wingo, a prominent banker, was born on July 4, 1873. He held leadership positions with the Lowden National Bank, American National Bank, Rio Grande Valley Bank and Trust and City National Bank during his career. Mr. Wingo was also a member of the Toltec Club and El Paso Country Club, and he and Mrs. Wingo were part of the “exclusive Fin and Feather Club.” He was active in the Liberty Loan campaign in 1917 to sell Liberty Bonds and “Give Pershing a push!” during World War I. General John Pershing was a friend of the Wingo family. Wingo also campaigned in 1918 to outlaw saloons in El Paso, citing the financial benefits of such a measure.

Mrs. Wingo, the former Elena Rohrabacher, was a prominent society matron who hosted frequent gatherings in the home. She was known for her weekly visits to the hospital at Fort Bliss during an influenza epidemic and for opening the home to convalescent soldiers for weekly outings that included music and refreshments. She was also known for the menagerie she kept at the home, ranging at different times from bulldogs, horses, pigeons, foxes and bobcats to about 100 birds which called the aviary home.

Grace Wingo at the time of her marriage to Emmett Aiken

Their daughter, Grace Wingo, was “popular with the young officers” of Fort Bliss during many parties hosted at the home. She married one of them, Lieutenant J.B. Anderson, in 1915 and later became the bride of Emmett Aiken Jr. in 1917.

Their son, T.L. Lowden Wingo, received a commission in the army in 1918 and was an instructor in military tactics of 110 soldiers at Camp Mabry in Austin. He was married to Ella Mae. He died in 1969, and Ella Mae followed in 1975.

As of July 2017, the building was the home and law office of David Ellis.

Neither here nor there: Mr. Wingo made the paper in 1911 when he engaged in a fistfight with an A.H. Richards in front of the American National Bank building on Oregon Street. On that January morning, Wingo cursed Richards over the matter of a bill for $40 Richards had collected from Mrs. Wingo. Mr. Richards’ face was reportedly bruised afterward, but Mr. Wingo “showed no effects of the fight.” … Mr. Wingo claimed in a 1935 newspaper article that he and Mrs. Wingo had “raised 250 English bulldogs over a period of 20 years. … Grace Wingo was noted for her skill as a horsewoman. … A 15-year-old Lowden Wingo made the police blotter in 1914 when he was held up by two masked men in front of the family home. As one of the robbers held a revolver to Wingo’s stomach, the other made off with five dollars and “a few trinkets of small value.”

Since 1954 the El Paso County Historical Society has been a driving force in the historic scene of El Paso. EPCHS strives to foster research into the history of the El Paso area; acquire and make available to the public historic materials; publish and encourage historical writing pertaining to the area; and to develop public consciousness of our rich heritage.
Previous Ysleta Woman’s Club Next “Ostriches, Eggs and Young Birds in Washington Park”