by EPCHS in Latest, Uncategorized | 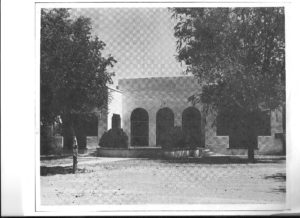 The Woman’s Club built its clubhouse in 1924. The building still exists, but the organization does not. The clubhouse is across from Ysleta High School on Alameda. The building was designed by notable architect Otto Thorman. The club also organized a WPA Library, the first library in Ysleta, with Olive Ellis as librarian. The clubhouse served as a place of worship for various religious congregations. St. Christopher had its start there in 1947 with Pastor Kenneth Rice. The Lutheran Redeemer took over after Rice moved his congregation to a new building donated by the Porchers on Riverside Drive.

Since 1954 the El Paso County Historical Society has been a driving force in the historic scene of El Paso. EPCHS strives to foster research into the history of the El Paso area; acquire and make available to the public historic materials; publish and encourage historical writing pertaining to the area; and to develop public consciousness of our rich heritage.
Previous Lower Valley Woman’s Club Collection Next Wingo Home hosted parties, animals and soldiers