City of El Paso Once Sold Two of Its Streets to Pay the Salary of Its Marshall by G.A. Martin–March 24, 1922 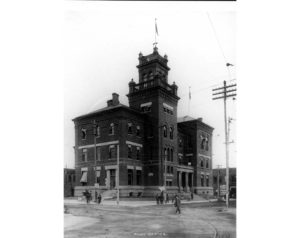 Federal Building on Mills and Oregon, some thirty years after the debacle highlighted in this article.

The following story appeared in the March 24, 1922 edition of the El Paso Herald:

El Paso once sold two of its streets at public auction, “because the city has no further use for them,” according to records found in the city clerk’s office by Maj. R. F. Burges, attorney.

The sale took place during the first mayoralty administration of the city when Ben McDowell was the mayor.

The streets sold were Oregon street, between San Antonio and Mills, and Texas street between Oregon and Mesa, and the sale was for the purpose of raising money to pay the salary of the city marshal.

Each street brought less than $30 and the sum not being enough to satisfy the salary of the marshal, he went out of office. The city administration then died, according to Maj. Burges, and it was several years before another effort was made to establish a municipal government for the city.

When the municipality was established,Maj. Burges says the records show that the officials did not know how to go a

Site of El Paso National Bank building, Oregon and San Antonio, circa 1892. The events in this article took place around 1874.

bout the collection of taxes. The officials all served free with the exception of a marshal and his salary was fixed at $100 a month. The councilmen thereupon proceeded to declare that a “tax of $1200 a year shall be collected upon all the property of the city of El Paso for the payment of this salary” but no collector or assessor was appointed and no tax rate was fixed. Consequently, nobody paid taxes. Later the councilmen issued an appeal to the patriotism of the property owners, who were invited to come forward and contribute enough money to pay the salary of the marshal.

This having failed to bring in the money, the mayor and councilmen solemnly entered an order stating that inasmuch as the people had refused to pay the necessary amount to liquidate the salary of the marshal, he be authorized to sell at public auction ‘certain streets for which the city has no presented need’ and named Oregon street between Mills and San Antonio and Texas street between Oregon and Mesa as the streets to be sold. The marshal proceeded with the sale and the council gave a deed to the streets, but the sums were so inadequate that the marshal decided to quit and someone with the interest of the city at heart went into court and showed that the councilmen could no sell a street and thus had set aside the transfer.

Since 1954 the El Paso County Historical Society has been a driving force in the historic scene of El Paso. EPCHS strives to foster research into the history of the El Paso area; acquire and make available to the public historic materials; publish and encourage historical writing pertaining to the area; and to develop public consciousness of our rich heritage.
Previous El Paso Women Pioneering Athletes: Golf Next El Paso Women Pioneering Athletes: Bowling