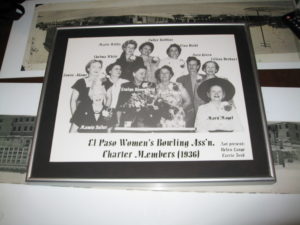 The El Paso Women’s Bowling Association was founded in 1936. It was also granted a charter from the Intentional Women Bowling Congress. Among charter members of the organization was: Luree Robbins,Marie Willis,Louise Adams, Pearl Paden,Evelyn Brownfield, Mamie Teller, Mary Mogel,Nora Green,Vins Diehl,Helen Lange,Lillian Drehner, and Carrie Ford. Thelma White was the first president of  the group.The first El Paso women bowling league was organized in 1935,it was called The Gateway League. The Gateway League  was organized by Georgia Wolf,Louise Thorman, and Evelyn Crownson,Nora Green, and Thelma White.

Before 1935, it was difficult for women to find a place to bowl and men did not like playing with or against women. Dave Lawson ,owner of the Knickerbocker Lanes, started offering free bowling and lessons  to women .Thelma White starting going to Knickerbockers. White have tried to bowl at the Elks Club,which had some lanes in the basement,she was allowed to play with men,but realized that this was not open to all women.

At Knickerbockers,Green and White attempted to organize a league,but they could not get all the women members together. White became one of the top bowlers of the association. After the organization of the Gateway League, other leagues was organized one at Riverside Bowling Alleys. Lawson organized the “Fair Sex” League which was  co-ed, at Knickerbocker Lanes.  Thema White, Nora Green, Marie Willis ,Gertrude Spain and Helen Risley composed, the El Paso All-Stars that entered the state  women’s bowling tournament in 1936. It was after the organization of the Gateway Leauge,that it was decided to form the El Paso Women’s  Bowling Association in 1936.

In 1942, Dave Lawson opened the Five Point Bowling Alley. Lucille Wilson worked hard to get women to play bowling at Five Points and eventually became manger of Red Rooster Lane. The first City Bowling Tournament was organized in 1937.  Wilson found it difficult to get other women to join the more established bowling leagues and started  the Standard Oil League with Thelma O’Keeffe. Another prominent woman bowler was named Alice” Boots” Brown who started playing at the Mesa Bowling Alley. Brown and Wilson became active in the State Woman’s Bowling Association and bought the state  tournament to El Paso ,at the Five Points Bowling Alley in 1948. C0nnie Gonzales, Lucille Wilson, and Alice Brown organized the 600 club, a sorority type organization,which was made up of women who rolled a  600 series. It later partnered with the El Paso Women’s Bowling Association. The 600 club was the first organization of it kind in Texas. The 600 Club started at Red Rooster Lanes.

Karen Linton, was the best known woman bowling national,state,city champion,who went beyond the El Paso Woman’s Bowling Association. Linton was also an El Paso Athletic Hall of Famer. Linton joined the American Junior Bowling Congress, in 1956 at age 13. In 1958,Linton recorded the highest average nationally at  the age of 15. In 1959,Linton again made a national record with her score of 179. and rolled the highest series for a senior division girl in the American Junior Bowling Congress. In 1969 Linton was the first woman in El Paso to a bowl a game of 300 and posted a 760 series,which was a state record. Linton was named “Woman Bowler of the Year”  by the Texas Women Bowling Association and continued to  make records . Linton completed in the her first pro-tour tournament  at the Norwalk Bowling Championships in Norwalk,CA in 1963,averaging  197.1 and made seventh place. Linton did Pro Bowling Tours until 1971 ,because of knee Injury but continued her record breaking bowling career. Linton finished second at the Wagon Wheel Classic in Oxford,CA. Linton retired in 1984 and at her last game she averaged,193.Linton graduated from Austin High School and was members of the Girls Athletic Association and  were voted the most athletic girl .

Since 1954 the El Paso County Historical Society has been a driving force in the historic scene of El Paso. EPCHS strives to foster research into the history of the El Paso area; acquire and make available to the public historic materials; publish and encourage historical writing pertaining to the area; and to develop public consciousness of our rich heritage.
Previous City of El Paso Once Sold Two of Its Streets to Pay the Salary of Its Marshall by G.A. Martin–March 24, 1922 Next Mystery solved: Lolita around the corner