Mystery solved: Lolita around the corner

Walking down Texas Avenue recently, I noticed a weathered, sun-beaten sign atop a building at the corner of Texas and Oregon Street.

“AROUND CORNER: Lolita,” it read. 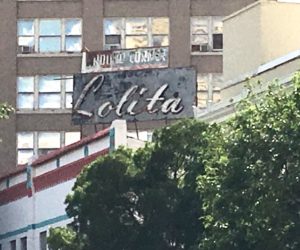 I walked around said corner but found no teenage nymphette from that book by Nabokov, nor any evidence that she had been there. (The 1997 film remake did shoot scenes in El Paso, but I digress.)

So, off to the archives I went.

Turns out there were not one, not two, but THREE Lolitas inhabiting downtown El Paso from the 1960s to the 1980s.

They were dress shops.

The Shop Around The Corner was the third in the series owned by James P. and Leora H. “Lolly” Williams.

The Williams family first made its appearance in El Paso in 1953, when James was a salesman at Sears. The following year, he became a real estate agent with the Kimmel and Mena agency. He continued in this career path throughout the rest of the ’50s, eventually representing the S.M. Mena, Andy Guevara and Ace Realty agencies until 1960.

Mr. Williams was mentioned in an article in the El Paso Herald-Post in October 1955 in which homeowners on Florida Avenue complained of being pressured by Williams and another agent to sell their homes to make way for the coming of Interstate 10. The homeowners claimed they were told that if they didn’t sell, the city would bulldoze their homes. Williams and his colleague denied having made the threat.

The first Lolita dress shop showed up in the 1960 city directory, located at 303 E. Overland. Two years later, the Williamses opened a second store in the Hotel Cortez at 302 N. Mesa.

Mr. Williams was quoted in the Aug. 6, 1962, issue of the El Paso Herald-Post as opposing the city’s plan to build a parking garage near the Overland store, at the corner of Mesa and Overland.

“I’d be against this thing even if not involved personally,” Williams said. “There have been practically no new businesses opened downtown in the last 10 years. Meanwhile, seven decentralized shopping centers have opened.

Ultimately, the garage was not built at the proposed location. 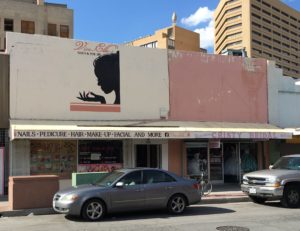 The Overland store continued to operate until 1964, the same year Mr. and Mrs. Williams opened their last store – the one in question at 204 N. Oregon. The building at 303 E. Overland is now home to the Viva Nail Salon and Cristy Bridal.

The Lolita dress shops were twice featured in the El Paso Herald-Post’s 1960s women’s page item, “The El Paso Woman.” One piece stated that this modern woman went to work, and showed a model dressed in the latest office attire from Lolita. Another reported that the El Paso Woman goes 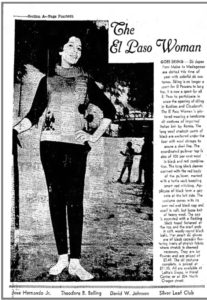 skiing, showing a model in a ski ensemble, also available at the Lolita shops.

The Williamses ran both the Mesa and Oregon shops until 1973, when the store in the Hotel Cortez closed its doors.

In 1982, the city directory listed new owners for the remaining Oregon store, Gus and Margie Hauptman, though the Lolita Dress shop remained associated with the Williams entry until 1984.

The Oregon shop went out of business in 1984. Today, that location is an empty storefront between the Kress Building and the Ria Market. 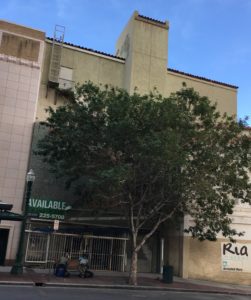 Mr. Williams passed away in April 1986. By August 1992, Leona had followed her husband and their shops into the annals of El Paso history.

Since 1954 the El Paso County Historical Society has been a driving force in the historic scene of El Paso. EPCHS strives to foster research into the history of the El Paso area; acquire and make available to the public historic materials; publish and encourage historical writing pertaining to the area; and to develop public consciousness of our rich heritage.
Previous El Paso Women Pioneering Athletes: Bowling Next Corinne A. Hartman: Founder of Hartman Flower Shop.