From the Archives: Scrapbooks 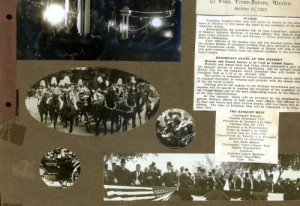 The meeting of presidents William Howard Taft and Porfirio Díaz at the Mexican-American border was the first in history between the presidents of the United States and Mexico.

The Harry Mitchell Scrapbooks which covers the brewery and the mint bar that  Harry Mitchell owned. Another prominent collection includes the Julius Buckler Photographic Album of 1902 which was auctioned on eBay and purchased by the El Paso County Historical Society thanks to  Sam Moore, Frank Gorman, Mike Hutson, Hughes Butterworth, Jennifer Nielson, and Pat & Richard Worthington. The majority of the photographs are unidentifiable although the featured people are family members except for the Otis Aultman photo. The Buckler Square pictures are the only known pictures of that location which is the area of the present-day Cleveland Square.

Another scrapbook in our holding includes The Stevens/Darbyshire Scrapbooks which also relates to the Battle of Juarez and also has family photos covering the periods of 1908-1913. The first three pages are personally photographed pictures of the Battle of Juárez and its results. There are 41 pages of Darbyshire family pictures from Ohio, Texas, California, Oklahoma, and Kansas. They also are an excellent documentation of clothes and activities of the 1900-1910 era.

Other scrapbooks in our collection include the Otis Aultman scrapbook and Dan Reckhart’s McGinty Band. The McGinty Band’s Scrapbook documents the activity of the early social group in El Paso. The scrapbook was the main source behind Conroy Bryson award-winning book “Down with McGinty: El Paso in the Wonderful Nineties”. The Aultman scrapbook belonged to the noted southwestern photographer, Otis Aultman who lived in El Paso and had a studio here. The Scrapbook is only nineteen pages long, but it documents Aultman’s work during the Mexican Revolution. It includes a photo of him filming during the Mexican revolution.

Class Autograph Book belongs to John Alexander, a student at Crockett, Class of 1937

Scrapbook of Dr. Hornedo circa 1930

Since 1954 the El Paso County Historical Society has been a driving force in the historic scene of El Paso. EPCHS strives to foster research into the history of the El Paso area; acquire and make available to the public historic materials; publish and encourage historical writing pertaining to the area; and to develop public consciousness of our rich heritage.
Previous The El Paso Woman’s Club and the Woman’s Suffrage Movement By Joseph Longo Next From the Archives: Anita Lee Blair