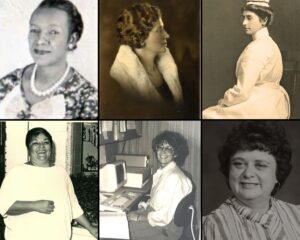 Did you miss any of the Women’s History Month posts?

Here’s a look at what you may have missed and other posts celebrating women’s accomplishments in El Paso.

In 1929, Mabel Clair Welch and her son Elvin vacationed in California, and during the trip, she studied Spanish-style architecture to gather ideas in her home designs in El Paso.

As the decade ended and the 1930s began, Mabel designed many Spanish Colonial Revival-style homes.

Judy Zarate, a member of the Laguna Pueblo, served in local and national roles in the Women’s Political Caucus, becoming a leader of the caucus in the 1980s.

This mother of three and member of Leadership Texas was twice local chair of EPWPC and served on the board for nine years.

Anne Holder, a UTEP-trained sociologist, educator, and early activist in the El Paso Woman Political Caucus, was named Feminist of the Year in 1976 at their Women’s Equality Day (WED) fundraising banquet.

Her obituary in the El Paso Times in February of 2017 described her “as a woman of passion and burning rhetoric.”

Bonnie Lesley and the Founding of the El Paso Women’s Political Caucus.

Lesley, who worked as an Eastwood High English teacher, was chosen Feminist of the Year in 1975.

Click here to learn more about the El Paso League of Women Voters.

The city had a small yet intensely cohesive African American community that was socially and politically active.

Click here to learn more about the African American Suffragists in El Paso.

Here’s how Texas women received right to vote and what role El Paso had.

Click here to learn the history and see the timeline

Want to learn more about Women’s History in El Paso?

The El Paso County Historical Society would like to give a big thank you to Eva Antone Ross and Susan Barnum.

Since 1954 the El Paso County Historical Society has been a driving force in the historic scene of El Paso. EPCHS strives to foster research into the history of the El Paso area; acquire and make available to the public historic materials; publish and encourage historical writing pertaining to the area; and to develop public consciousness of our rich heritage.
Previous Mabel Welch:Pioneer Woman Architect Next El Paso County Historical Society begins a series of discussions with dinner and talk on July 23, tickets are limited